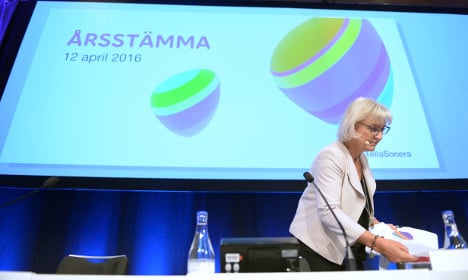 The Swedish telecom giant features in several international probes into suspect transactions that were allegedly carried out when the company attempted to break into the Uzbekistan market in 2007.

Along with Russian-Norwegian Vimpelcom and Russian MTS, it is facing accusations of having paid around a billion dollars in bribes to the daughter of Uzbekistan's then-president Islam Karimov, to be allowed to conduct business in the Central Asian country.

Criminal investigations are ongoing in Sweden, the US, Switzerland, Norway and France.

Telia said it had received a rough draft of a proposal including the settlement figure by US and Dutch authorities late on Wednesday and added that it would seek more information.

“I have said on many occasions in the past that Telia Company’s entry into Uzbekistan was done in an unethical and wrongful way and we are prepared to take full responsibility. We are cooperating fully with the authorities to bring clarity to the matter,” said chairwoman Marie Ehrling in a statement on Thursday.

“With that said, our initial reaction to the proposal is that the amount is very high. We will now have to analyze the information and decide on how to proceed with the ongoing discussions with the authorities.”