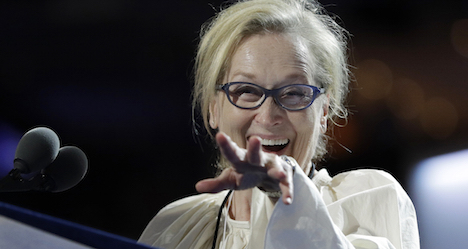 Meryl Streep. Photo: John Locher/AP/TT
“A global handshake between employers and employees”. That’s how Swedish Prime Minister Stefan Löfven described his Global Deal project to help the world learn from the Swedish model of unionised workplaces.
But the project risks losing momentum as the hoped-for endorsements from celebrities and Swedish companies are failing to turn up.
The Global Deal is being launched next Wednesday at the United Nations in New York, with support from the OECD and the International Labour Organization, the ILO.
The Swedes sent letters to stars including Meryl Streep, Bruce Springsteen, Matt Damon, Indian star Deepika Padukone and Swede Alicia Vikander, in the hope of raising the project’s profile.
So far only Meryl Streep has replied to the letter, sent six weeks ago – with a no, according to Expressen.
The PM has had a bit more luck with getting companies to back the plans: Swedish fashion giant H&M, truck maker Scania and grocer ICA have promised to get involved.
Coca-Cola, Ford and paper maker Stora Enso have said they “welcome the initiative”, but won’t be in New York for the launch, according to Dagens Industri. Electrolux, Heinz and Spotify have said they don’t want to be involved at all.
Canada, Chile, Colombia, Bangladesh, Ethiopia, Cambodia and Austria have all joined the initiative. But interest from the US seems to have cooled. Vice President Joe Biden had praised the initiative during his recent Sweden visit and had said he would come to the launch “if the President doesn’t sent me somewhere else.”
Now, though, Löfven’s press secretary has told Expressen that Biden “unfortunately didn’t have the opportunity to take part in the launch.”
The idea behind the Global Deal is to give unions a bigger say in workplaces around the world, a concept that closely resembles the ‘Swedish Model’ of employer-union cooperation. Löfven, a former union leader, has been outspoken in his defence of Sweden’s cooperative model.
“When representatives of labour and capital meet to ensure fair conditions for employers and employees alike, to the benefit of both – and of the society they work in,” Löfven said at a speech at the UN last year.
“We share a planet, we share a global economy, and we increasingly share a global labor market. For this reason, we also share the task of finally taking responsibility for global working life.”