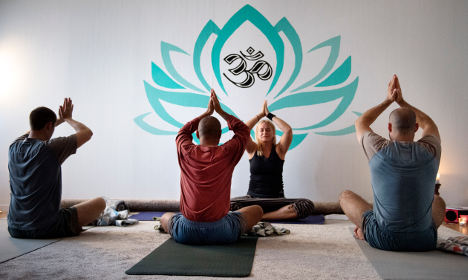 Researchers split 152 inmates at nine of Sweden's prisons into two teams, where one half took part in a weekly yoga session for ten weeks and the other did other physical exercises.

The final result was partly based on a questionnaire participants filled out at the end where they themselves got to evaluate how their emotional health and behaviour had changed.

“In the yoga group we saw a decline in impulsivity, increased attention span and they estimated that their antisocial behaviour had gone down – for example how many conflicts they were part of – than the rest,” psychologist Susanne Apelqvist told the TT newswire.

Called 'crim yoga' ('krimyoga'), around 30 jails and detention centres in Sweden currently offer classes, led by Swedish Prison and Probation Service staff trained in teaching the philosophical exercise form. Between 5000 and 6000 inmates have taken part in the scheme, which has its own YouTube channel, since it started in 2008.

“You forget where you are when you do yoga. You get out of here mentally,” said a 34-year-old inmate referred to only as 'Kalle' serving a jail sentence of several years at a detention centre in Norrtälje.

“You wind down and often you feel good for the rest of the day. I actually think that this is a thing I'm going to continue doing when I get out. It makes me feel good,” he told TT. The study, commissioned by the Prison and Probation Service, is the first of its kind in Sweden, but is based on a study from the University of Oxford in 2013, which reported similar results.

“When they are released, if they continue to practise yoga, it is possible that it may reduce the risk of reoffending,” said Apelqvist.

“You get a lot of self-knowledge and rid yourself of a lot of negativity. It is very therapeutic.”