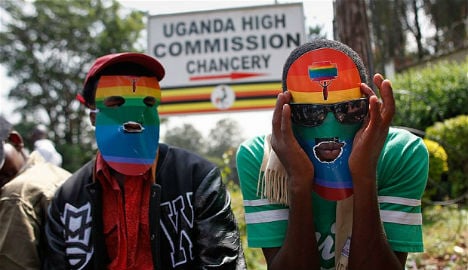 Gay activists protest against discrimination in Uganda. Photo: SMUG
The man, who first sought asylum in 2012, was expelled from Sweden three days after a court had ordered his rejected asylum claim to be reconsidered, Sweden's state broadcaster SVT reported.
Although Sweden’s Migration Agency began to reappraise the case, it neglected to inform the police, and as a consequence the man was arrested and sent home.
In 2014, the country passed its controversial Uganda Anti-Homosexuality Act, which makes homosexual acts a crime punishable by life imprisonment.
According to Amnesty International, gay people in the country face frequent harassment, which tabloid papers in the past publicly outing gay men.
The Justice Ombudsman, which is tasked by the country’s parliament with overseeing the operations of the Sweden’s courts and police, said the case highlighted the poor communication between different agencies.
It criticised the responsible officer in the Stockholm Police for failing to check if there were any obstacles to deporting the man, the Migration Court was criticised for failing to inform the police, and the Migration Agency for failing to register the court’s decision on its systems.