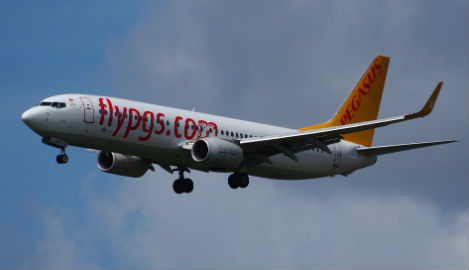 The baby was born on board a flight operated by Turkish low-cost airline Pegasus. Photo: Wikimedia Commons/Alf van Beem
The baby and its mother were rushed to the nearby Danderyd Hospital as soon as the plane, which was operated by Pegasus, a low-cost Turkish airline, landed at 00.30.
“It was a wonderful and healthy baby,” Nisrin Sabuncu Hajar, who helped in the delivery, told Sweden’s Expressen newspaper.
“As soon as the baby came out, everyone calmed down, everyone was happy.”
Hajar was called in when the woman, a 30-year-old who spoke only Arabic, began having contractions half way through the flight and confessed that she had boarded the plane well into the ninth month of her pregnancy.
“Then the staff panicked and asked the pilot to make an emergency landing,” Hajar said.
The woman asked the pilot not to land in Ukraine, the nearest country, and the plane instead pushed on towards Sweden.
Another woman who had been trained as a nurse but who now worked as a teacher, helped in the delivery.
“I have been at some deliveries and that was why I did not panic. I just tried to do my best to help her,” Hajar told the newspaper.
“She was really scared because she came from Syria and was alone with three children on board,” she went on. “This was the first time she'd come to Sweden.”
When the baby was born, everyone began applauding. Ambulances were waiting at Stockholm’s Arlanda, and specialised nursing staff came on board to cut the baby’s umbilical cord.
“It's a pretty rare occurrence,” Hajar told the newspaper.