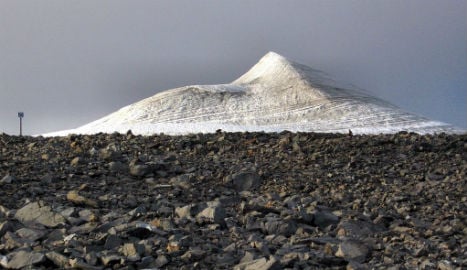 The peak of the glacier on Kebnekaise's southern peak. Photo: Grapetonix/Wikimedia Commons
The melt has left Kebnekaise's south peak with just a 30cm edge on its rival, the rocky north peak of the same mountain.
The south peak of Kebnekaise measured 2,097.1m above sea level when scientists at the Tarfala research station took their final measurement of the year on Friday. The north peak, which has no snow or ice cover, comes in at 2,096.8m above sea level. At this time last year, the difference between the two was 80cm.
“It very much depends on how much snow comes in the winter and how hot it is in the summer,”  Torbjörn Karlin, the station superintendent, said when asked whether the north peak would finally take the lead next year.
“We've said this [that it will overtake] for several years in a row, so if we say it again now, it will hopefully be right next year, but we don't know.”
When Kebnekaise's north peak does overtake, it will make climbing to Sweden’s highest point significantly more challenging.
“Sweden will get a new highest summit, and to climb the new summit will be technically much more difficult than to climb the glacier,” Karlin said. “You will need a guide.”
He said that the glacier had been melting on average ever since the end of the medieval cold period 200 years ago. It has lost 21m since 1968, when it was 2,120m high.
After the first prediction that it was set to overtake by the north peak in 2014, the height instead remained constant in both 2014 and 2015, before dropping 50cm this year.
Scientists such as those at Tarfala research station have been measuring the height of the snow glacier on Kebnekaise annually since 1946.