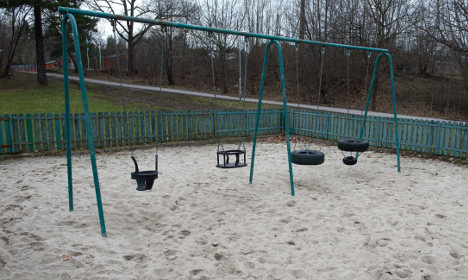 It was a swing similar to the one on the left. Photo: Bertil Enevåg Ericson/TT

Don't judge, you know you've been tempted to try the same thing.

Anna Khorasani, 19, grabbed unexpected headlines after she gave into that temptation when she and her friends spotted a set of swings at a playground in Eskilstuna, central Sweden, at around 3am on Sunday.

Little did she suspect, when she got into that baby swing, that getting out would be such a challenge.

“At first we thought that this only happens in movies, this is not happening,” the teenager told the Expressen tabloid after news of the unfortunate mishap broke when local newspaper Eskilstuna-Kuriren reported it.

She described how after an hour's struggle, which included her friends trying to cut her out of the swing using a kitchen knife, she gave up and saw no option but to call emergency services and confess.

“It was so incredibly embarrassing to get them out for something like this at half past three at night,” said Khorasani, who also live-reported the awkward incident on Snapchat.

Four firefighters dutifully turned up and were quickly able to cut her loose.

“If they had not been so attractive it would not have been that bad. But it was a bit embarrassing that they looked so good and were all beefy and really tried to rescue me. But I know that they're laughing today, and their families, colleagues and half of Sweden,” she said.

The emergency services did not seem too upset about being called out to the unusual job.

“The story had a happy ending,” a control room officer told Eskilstuna-Kuriren.

This is not the first time a swing set has featured in Swedish news.

A memorable story from 2013 involved a drunk elk who got his horns tangled up in the swings at a playground in the Stockholm archipelago following a suspected binge on fermented apples.