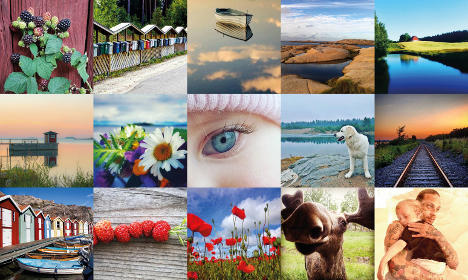 Some of the 20 finalists, including a toddler's selfie (centre). Photo: Postnord/TT

Over 20,000 images were sent in to Swedish-Danish postal service Postnord’s competition through Instagram, before a jury cut them down to 20 finalists.

The general public will now vote for their three favourites until October 20th, where the trio with the highest number of votes will be combined with four of the judges’ picks to make up the seven new stamps.

A photo posted by Pernilla Bjäringtoft (@grandmashomeandgarden) on Sep 18, 2016 at 10:31pm PDT

The winning stamps will be presented in November, and released in May 2017.

One of the images that made it to the final 20 was Fredrik Thomasson holding his sleeping son, Charlie.

“I was sitting watching TV and drinking my coffee when they were doing an interview with Postnord about the competition. That picture came to mind straight away because it means a lot for me. I sent it in for fun and apparently more people than just me like it,” he told The Local.

“Charlie has already decided that if we get to be on a stamp he wants to send the fee we’ll get to sick kids so they can be happy and perhaps healthy. So it’ll go to the Barncancerfonden (Child Cancer Fund),” he explained.

The rest of the top 20 can be viewed on Postnord's website for the competition.

This is the first time that the general public will compete to be on one of Sweden’s stamps, but the country has a history for getting creative with its postage.

In 2014, stamps featuring pictures of Zlatan Ibrahimovic’s famous bicycle kick goal against England were released, leading to French fans of the footballer importing them in their thousands. One of the Zlatan Ibrahimovic stamps released in Sweden in 2015. Photo: Anders Wiklund/TT

This year meanwhile, the Pride rainbow flag appeared on a new run of stamps, something that is believed to be a first in the world.