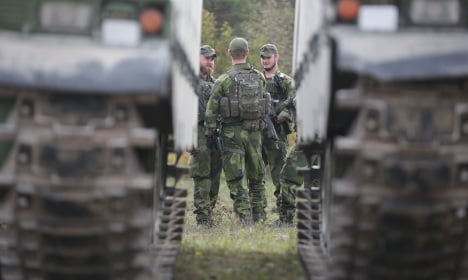 Dagens Nyheter (DN) claims that the the threat and its nature have been classified as top secret, meaning the contents cannot be disclosed without a government decision to declassify it.

Since the summer both Sweden’s Supreme Commander of the Armed Forces Micael Bydén and defence minister Peter Hultqvist have spoken of a worsening security situation for the country.

At the same time, leaders in the Armed Forces decided that unannounced inspections of their units’ readiness would be carried out, while they also sent 150 soldiers from central Swedish town Skövde to train on Gotland off the east coast.

Last Wednesday, the Supreme Commander ordered the soldiers to stay put on the island, bringing forward a previous decision to station soldiers on the strategically located island from late 2017.

“Something has happened in the intelligence picture, but we citizens don’t know what. We can see the effects of it however. The rapid basing of a unit on Gotland is exceptional,” intelligence analysis professor Wilhelm Agrell told DN.

Swedish Armed Forces press secretary Jesper Tengroth denied that a specific event was behind the decision to keep troops on Gotland however.

“Rather, it’s a worsening over time in the surrounding world that is behind this, and with regards to DN’s information, we don’t comment on our intelligence work,” he told news agency TT.

Hans Wallmark, the defence policy spokesperson for the opposition Moderate party, said that though he had not been informed by the government about an increased threat from Russia, he was not surprised by the information published.

“This shows a steadily deteriorating security picture around the Baltic Sea,” he told TT.

He also demanded that the government should call an advisory study (Försvarsberedning) to produce a major review of Sweden’s security situation.

“It is important to understand the world around Sweden. You can then draw operational conclusions from that, both on security policy and defence policy,” Wallmark added.