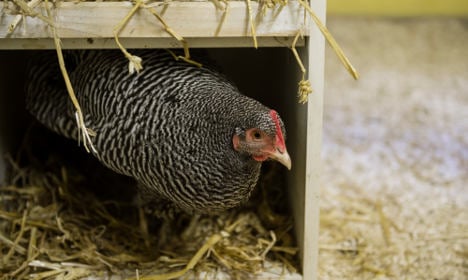 Is it safe to come out...? Photo: Vilhelm Stokstad/TT

So you can forgive the elderly owner of one chicken coop in southern Sweden for first believing it was a fox on the rampage when she heard strange loud noises coming from the poultry shed.

But when she looked outside she did not see a wild hen-chasing animal so much as a fowl sight in the shape of a naked 37-year-old man crawling out of the shed without clothes but covered in blood.

Police were immediately called and came to the property in the tiny village just shy of 50 residents, a few kilometres east of Ikea town Älmhult, to take the man into custody and let him sober up in the drunk cell.

Afterwards, he did not remember how things had got so bad, but confessed he had consumed beer, whisky, cider and wine despite an all-too-soon-abandoned pledge not to drink at his friend's 60th birthday party.

From that poultry excuse onwards, it is difficult to join the dots. But it is believed that the man somehow made it into the hen house and struggled to get out again, because all four windows were found broken, with watering troughs and a bag of wheat thrown through them. In the process, he cut himself on the glass.

The man, who lives in Malmö, has now been sentenced by Växjö District Court to pay thousands of kronor in damages to an insurance company as well as fines.

In terms of weirdness, this story is not quite up there with the pig-mask-wearing sex couple halting traffic in Insjön, Dalarna, after first shining laser beams at Pokémon-hunting teenagers. But it comes pretty close.