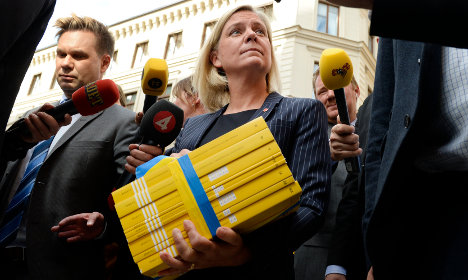 “This is a budget shaped by the work we have been doing in the last two years, which has started to produce results,” Andersson said at a press conference before presenting it to parliament, which will debate the proposal and vote on it.

The biggest allocation is 10 billion kronor ($1.16 billion) per year to municipalities and county councils, while 3.5 billion kronor ($408 million) will go to refugee and integration projects. The latter amount includes covering the cost of proposed changes to the Swedish Migration Agency which aim to accelerate new arrivals’ entry to the country's labour market.

The police will receive 100 million kronor ($11.6 million) extra over the next year, while security police Säpo will receive 80 million ($9.34 million). That allocation will increase so that by 2020 it is over one billion kronor higher than today.

Initiatives focusing on the environment and climate change will also receive significant funding, with 1.8 billion kronor ($210 million) to be allocated to them in the next year. Around 700 million of that amount is to replenish premiums for environmentally friendly cars, and 500 million to support efforts to meet EU requirements.

Over 900 million kronor ($105 million) will also be invested over the next four years in the new government agency dedicated to achieving a gender equal society, as well as a new national strategy on violence against women.

KEY POINTS: What you need to know about the budget proposal

Finance Minister Andersson claimed that the Social Democrat-Green coalition government took over the largest budget deficit in Sweden since the 1990s, which has led to a tight fiscal policy until now. At the same time, the country has had to get to grips with the global refugee crisis, at the height of which in 2015 record numbers sought asylum in Sweden.

“We are on the road to balance and a substantial surplus,” Andersson said, adding that the budget was characterized by “stable growth, more jobs, falling unemployment and stronger public finances”.

Savings will be made on the funding of trainee positions, which has not produced as many jobs as the government had hoped for. That programme will be reduced so that 1.7 billion kronor ($198 million) is saved.

Expenditures for sickness benefits and rehabilitation meanwhile, which have increased budget after budget, have now been revised downwards said the finance minister.

“That concerns about five billion kronor ($584 million) annually, and that’s of course not only good for the state finances, but also for the sick,” Andersson commented.

But opposition politicians criticized the plans. The centre-right Moderates argued that the government had underestimated integration problems and the difficulties of many to get on to the labour market.

“We're talking about a couple of hundred of thousands of people who need jobs that don't exist today,” said its finance spokesperson Ulf Kristersson.

The anti-immigration Sweden Democrats, who sparked a political crisis in 2014 when they brought down the government's budget by backing the opposition, said they would vote against the new proposal.

“It is my assessment that the government hasn't got migration costs under control,” said spokesperson Oscar Sjöstedt.

The government will seek to raise money for its plans by making more people eligible to pay state income tax. Taxes on alcohol and fuel will increase, while a tax on banks will be introduced.

They will however have to borrow to fund some of the reforms for 2017. The director of Sweden’s National Institute of Economic Research (Konjunkturinstitutet) believes that will not be a problem.

“Because we’re going into a boom just now it’s desirable to have a higher level of funding for next year,” Urban Hansson Brusewitz said.

Not everyone is convinced though, including Swedish bank Swedbank’s chief economist Anna Breman.

“The GDP forecast for this year and next year looks reasonable, but in 2018 and 2019, according to the government, it will increase again. I don’t understand where that growth will come from,” she told news agency TT.

Nor does Breman think the new budget addresses some of the biggest issues facing Sweden.

“I can see a lot of small reforms, but no coherent approach to tackling the big challenges: the division of the labour market, or the housing market.”

Regarding Sweden’s target of having the EU’s lowest unemployment rate by 2020, Andersson admitted that achieving it will be difficult, but insisted that the country is “much closer to the goal than it was when we took charge two years ago”.

Unemployment in Sweden is estimated to be 6.8 percent this year, before decreasing to 6.3 percent in 2017. By 2020 it is predicted to be 6.2 percent, something Andersson said the government is “not satisfied with,” before promising further action in the area.

The budget proposal is next set to be debated and voted on in parliament later this autumn.