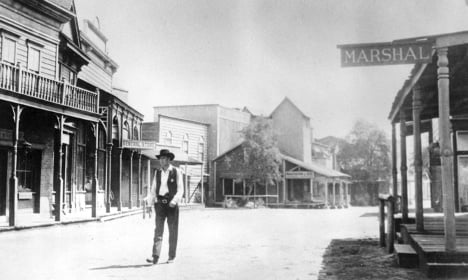 Gary Cooper in High Noon, not related to the article. Photo: AP

Several police patrols were urgently called to the high school Sandagymnasiet in Huskvarna just after high noon on Monday to deal with a suspicious-looking individual seen carrying a gun.

“We alerted the police because staff saw someone walking past in the school yard who looked like he was armed,” school head Ulf Andersson told Jönköpings-Posten.

But when the posse arrived they found only a lonesome young cowboy on his way to a fancy dress party, wondering why his Stetson, boots and fake revolver had sparked such a commotion.

“One of the guns looked very genuine and of course we dispatched several patrols,” Annelie Johnson Hammo, a spokesperson for the Jönköping sheriff's office, told regional news site Jnytt.

“It turned out not to be a serious situation; it was a student who was there to pick up a friend.”

The officers drove the cowboy off into the sunset (well, they gave him a ride back home to his parents) and he is not suspected of any criminal offence.

Students across Sweden were warned after last year's October's attack at the Kronan school in Trollhättan, where a far-right sympathizer killed three, to be careful when bringing fake weapons to fancy dress parties.

“We're on our toes today. It's different from five years ago, we take no risks. We're now going to evaluate how we acted today,” Andersson told Jnytt.