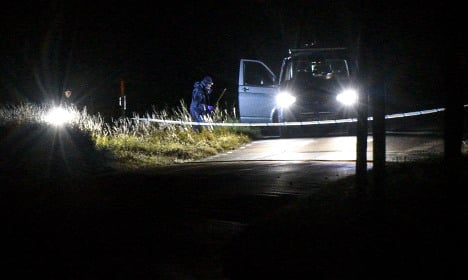 Police where the body was found. Photo: Johan Nilsson/TT

Police have not confirmed reports in Swedish media that the dead body belonged to a woman, but said that a man had been arrested early on Wednesday morning.

“I can confirm that a man has been arrested on suspicion of murdering this person,” police spokeswoman Eva-Lotta Hermansson Truedsson told the TT news agency.

According to court documents, the suspect is in his 40s and lives in Helsingborg.

The body was found at around 8.30pm on Tuesday, on the roadside a few kilometres outside of Bårslöv, a small rural town east of Helsingborg in southern Sweden.

“We get a call-out to a fire in the field. On our way there someone calls again and says that it is probably a human,” fire and rescue officer Ronny Möller told TT.

The flames were quickly extinguished, but the victim could not be saved.

“It will probably take some time before the person is identified, because the body is completely burned,” said north-western Skåne police officer Nils-Erik Svensson.