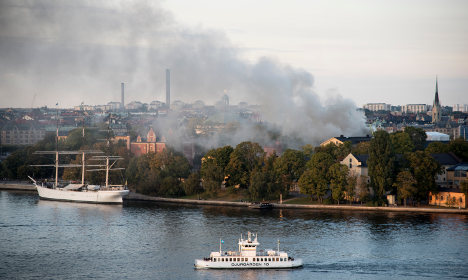 The fire at Skeppsholmen on Wednesday. Photo: Marko Säävälä/TT

The fire started at around 4pm on Wednesday, when cardboard boxes and garbage on the fourth floor of the premises started to burn. The first section was eventually extinguished but the situation soon worsened again and the fire spread further up into the attic.

By 8.30pm people in the vicinity had been urged to stay indoors and keep windows closed, with police cordoning off the island.

Some 40 firefighters from six different stations were still working on the fire on Thursday morning. By Thursday morning the fire had spread to the third floor of the building, while both the attic and fourth floor also continued to burn.

Emergency services say there was no risk of the fire spreading to other buildings, but material damage is expected to be significant.

“We’re fighting on to try and save the building, but we don’t know yet if we’ll succeed,” Karlsson explained.

During the night firefighters made a hole in the roof of the building to ventilate smoke and heat from its attic.

By Thursday afternoon they said they had managed to get the fire under control.