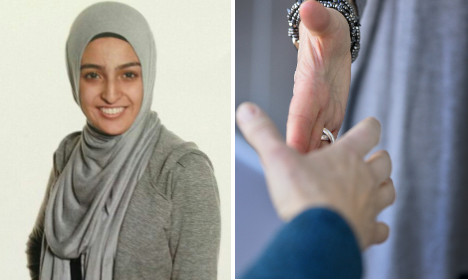 Fardous El-Sakka (left) was told she must shake hands with colleagues to work at a school in Helsingborg. Photo: Private & Anders Wiklund/TT

Fardous El-Sakka had been doing shift work at Kunskapsskolan in Helsingborg, southern Sweden, since August. The 20-year-old, who is Muslim, chose not to shake hands with her male colleagues for religious reasons, instead opting to put her hand on her heart and bow.

When one of the male staff members took offence over her not shaking hands with him, El-Sakka was called to a meeting with the school’s principal.

She was told that staff members are required to conform to the institution’s values if they want to work there, which include gender equality.

“The school doesn’t differentiate between people or treat them differently. That’s what we advocate from our students, so the staff also have to do that.”

El-Sakka stopped working at the school as a result and also reported the event to Sweden’s Equality Ombudsman. Because she is a member of Swedish trade union Unionen, the case has been referred to the union instead.

“I haven’t received a reply from the union yet, they’re still looking at my case, so I don’t want to say too much until I’ve got some kind of information from them about what will happen with it,” the substitute teacher told The Local.

El-Sakka explained that this was the first time someone had been offended when she chose not to shake their hand. She added that as things stand it is difficult to see how she could return to the school in the future.

“It’s a special school for me because I was a student there. But I don’t think I can see a way back there now.”

“I would like to clarify that the school did not sack Fardous. She chose to leave after I explained what the school’s core values are. I would also like to carefully point out that the issue was not her religious beliefs, but rather it is about choosing to treat men and women differently by shaking the hands of women but not men.”

“We at the school treat all sexes on the principle of gender equality. If the the Equality Ombudsman were to decide that we have acted wrongly, we would naturally look at how we approach or interpret that,” she added.

There have been a number of similar rows over handshaking in Sweden recently. In July, a man lost his job at a local council for refusing to shake hands with female colleagues.

The most high-profile case meanwhile was that of Yasri Khan, a former Green Party politician who resigned in April due to controversy caused by his refusal to shake a TV reporter’s hand in an interview.