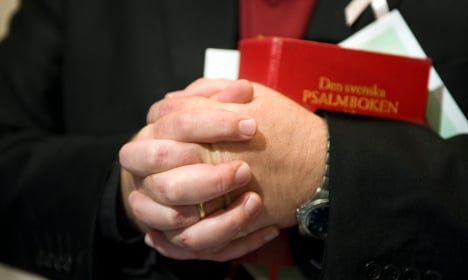 Five percent of 1000 respondents quizzed by major pollsters Sifo on behalf of Christian news site Dagen claimed that they said a table prayer once or almost once a day, either out loud or silently.

The practice is apparently more popular in southern Sweden, with 14 percent telling pollsters they said grace on a daily or almost daily basis, compared to only one percent in the Norrland region.

Mats Aldén of the diocese in Lund, which is organizing a Protestant-Catholic meeting attended by the Pope next month, said that church traditions were stronger in the south.

“More people get confirmed, baptized and have god parents. It could be linked to that,” he told Dagen. “It is more common in Denmark than in Sweden and the Skåne and Blekinge regions used to belong to Denmark.”

He added that being a region rich in agriculture could also be a contributing historic factor, saying: “They have had a lot of food to eat here and haven't been as poor as other areas. Large parties were and are common, especially in the countryside. I think that it comes from a kind of gratitude that people have had food to eat.”

The survey was based on phone interviews carried out from September 12th-15th.

Although based on a small selection of respondents, the results are surprising in the least religious country in the Western world, where the Swedish Church loses almost one percent of its members every year.

More than 47,000 members have left the Church so far this year.

A global WIN/Gallup International survey released last year suggested that almost eight out of ten Swedes describe themselves as either “not religious” or “convinced atheists”.