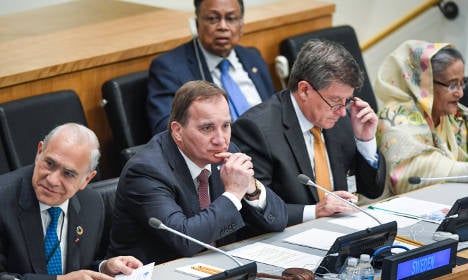 Löfven launched his Global Deal project at an event in New York on Wednesday evening, attended by a number of government heads as well as Sweden's Crown Princess Victoria.

The Social Democrat leader has described the initiative, meant to promote the Swedish model of unionized workplaces around the world, as a “win-win-win” deal and “a global handshake between employers and employees”.

“The Global Deal is about ensuring that more people around the world have secure and good jobs, and about a more equal distribution of our economic resources,” said Löfven in a statement on the day of the launch at the United Nations headquarters.

“Globalization presents opportunities, but requires a more equal distribution. More people need jobs with decent conditions and a salary they can live on. This is a prerequisit for globalization to be a positive force.”

Six weeks ahead of the launch, the Swedish Prime Minister had sent letters to stars including Meryl Streep, Bruce Springsteen, Matt Damon, Indian star Deepika Padukone and Swede Alicia Vikander, in the hope of raising the project's profile. But according to the Expressen tabloid, only Streep replied – saying she was not able to commit.

He had a bit more luck with getting companies to back the plans, with Swedish fashion giant H&M, truck maker Scania and supermarket chain Ica promising to get involved.

Other firms, such as clothing range Kappahl and TUI Nordic, said they wanted more information before signing up, while Electrolux, Skanska and SKF said they supported the idea in principle, but were already working on similar initiatives of their own. The idea behind the Global Deal is to give unions a bigger say in workplaces around the world, a concept that closely resembles the ‘Swedish Model’ of employer-union cooperation. Löfven, a former union leader, has been outspoken in his defence of Sweden’s cooperative model.

But its critics say that the bid has less to do with making an impact around the world, and more to do with shoring up centre-left grassroots support on home turf.

“This is a typical example of symbolic politics that don't really have much to do with the world but is more about showing Swedish voters that you care about major global issues. I think the companies see through that,” Nils Karlson, the CEO of Swedish business research institute Ratio, told news agency TT ahead of the launch.

But Löfven defended the venture on Wednesday.

“All you have to do is listen, there is an interest and the time has come to make sure that the global economy functions in a way that ensures the well-being of all people. Those who want to sit there and be cranky may do so, I'll keep working.”

“It's a long-term effort, you don't just turn the page and suddenly everyone has really high salaries.”