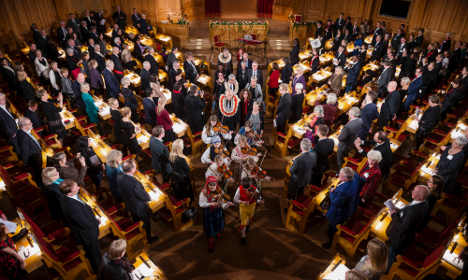 The Right Livelihood Award being handed out in 2015. Photo: Vilhelm Stokstad/TT

“It is very encouraging that there is so much successful work being carried out even in the most difficult situations. That is precisely why we have chosen these laureates because they are accomplishing so much despite great opposition in their home countries,” Ole von Uexkull, head of the Right Livelihood Foundation, told Swedish news agency TT.

Gannusjkina and Hassan both receive funding from abroad, which has led to the Russian being classed as a 'foreign agent' in her home country, while Hassan is not allowed to leave his, said the foundation.

The Syria Civil Defence, which is made up of 3000 civil volunteers, has saved more than 60,000 people from buildings bombed in the violent and long-running Syrian civil war.

Journalists at Cumhuriyet, meanwhile, have been exposed to great personal risk, including imprisonment and murder, because of the newspaper's reports on human rights, gender equality, secularism and environmental issues, said the Right Livelihood Foundation.

“Despite this they contribute through their work and do it with incredible bravery and admirable efficiency,” said von Uexkull.

A total of 166 people and organizations from 68 different countries working for sustainable development, human rights and peace have received the award, including Congolese gynecologist Denis Mukwege, Swedish children's novellist Astrid Lindgren and US whistleblower Edward Snowden.

They were introduced “to honour and support those offering practical and exemplary answers to the most urgent challenges facing us today”, according to the Right Livelihood Award Foundation, which often calls its distiction the “alternative Nobel prize”.

The awards will be handed out in Stockholm on November 28th.