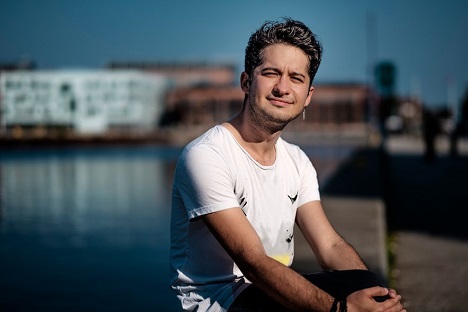 Akinalp Orhan.
But for one Malmö University student, his arrival in Sweden came with a sense of relief. Not just for himself, but for his family back in Turkey, a country currently in a state of national emergency.
Akinalp Orhan explains why he chose Malmö University, what he loves about its academic approach, and why not just Turkish prospective students should consider it as a destination for higher education, but anyone looking to study abroad.
Having previously experienced the Swedish higher education system as an Erasmus student, Akinalp was keen to get back to Scandinavia to progress his education at a master’s level.
The 24-year-old, who has formerly worked as a project coordinator for an NGO, now studies the two-year International Migration and Ethnic Relations Master’s Programme at Malmö University.
Reflecting on the current situation in Turkey, he explained:
“For me, the most obvious reason to leave is the ignorance at the situation; people are just ignoring the facts. As long as nothing is touching them they will just continue living their lives. If someone gets killed, no one cares, it’s like ‘yeah, it happens all the time’ – normalising things which really are not normal.”
Akinalp’s family live in Gaziantep, a city not far from the Syrian border where in August some 51 wedding guests were killed in a bomb blast carried out by Isis. One of his brothers-in-law, a doctor, has been arrested as a suspected conspirator of the recent coup; another, a policeman, has been suspended.
In recent months, some 15 universities have been closed down, and Akinalp doubts they will ever reopen.
“My sisters urged me to leave, to basically escape. They thought it was not safe as there was no future for me there,” he explains.
“I didn’t know there was going to be a coup when I applied for the programme, I did not know I would have wanted to escape the country back then. I was not really scared of the explosions, but there are other threats. I was much more scared of the state because you just don’t know what is going on day by day.”
He was awarded a scholarship for talented students which cover his tuition fees. Seeing his chance to leave Turkey and having researched previously at Malmö University, he did not look back. “There are not many universities in Europe offering this programme and I checked what scholars were there at Malmö and I saw there were some highly-respected academics,” Akinalp says.
“I arrived with five bags of luggage and was welcomed at the station. Student ambassadors helped me with my luggage. I was so surprised by how helpful people were.”
Ambassadors from the university took Akinalp to hs accommodation, showed him around the neighbourhood, told him where to buy second-hand furniture, how to use the laundry room, and more.
“My sister had just read the latest book by the Turkish author Elif Şafak, and apparently in that there is a girl who goes to Oxford University in England who was treated as well as I was here in Malmö. My sister wrote to me and said, ‘I thought that such things only happened in books!’” he remarks.
Akinalp says there are many reasons why he would recommend students choose to study at Malmö University.
First, the education system feels “less stressful” than many others while still putting responsibility onto the students' shoulders.
“You have to do your own stuff, it teaches you a lot, you have to struggle yourself to learn something,” he clarifies.
The relaxed relationship between the students and the teachers is also a unique selling point.
“I am used to a more formal hierarchy where there is a distance between you and your teachers. Here you can call your teacher by his or her first name and email them whenever about your work.”
The way day is structured was an adjustment for Akinalp, but he enjoys it.
“You have very few lectures, and the rest is up to you. I was used to a very different structure where you start the day at 10am and leave at 5pm or 6pm. Here, you do the reading around the lectures and then use the lectures as problem-solving time. If you don’t understand something, then you use that time to ask. That’s how it is done here.”
Finally, Akinalp says the international atmosphere at Malmö University is unbeatable.
“Life here as a student is great,” he exclaims.
“It feels like there is no campus area, as the university is in the city and feels like part of the city. It is great to experience studying abroad and I would recommend Sweden, and Malmö,  because of the nature of the education here. It is very multinational here, and I’ve also met six good friends from Turkey after  just three weeks!”
Find out more about international programmes offered at Malmö University
This article was sponsored by Malmö University.