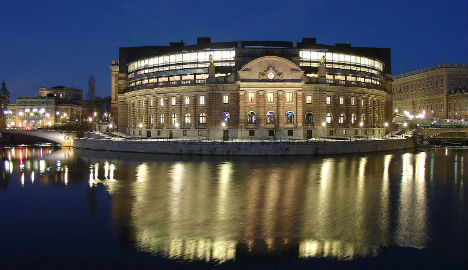 'Egor Putilov' had access to all areas of the Swedish parliament: Photo: Riksdag
A political secretary for the populist, anti-immigrant Sweden Democrats party has resigned after a scandal over him making several million kronor in a suspect property deal with a Russian businessman.
The man, who uses his official Swedish-sounding name in parliament and the name Egor Putilov on his blog said he had been forced to step down following a ”hate campaign in the media that is probably unparalleled in Swedish media history”.
“Because the hate campaign carried out by the media, I have become ill, and my private life has also been affected,” he told Aftonbladet.
The man, who changed his name after arriving from Russia about ten years ago, was employed at the party's Parliamentary Secretariat, giving him wide access to the Swedish parliament.
On Friday, Sveriges Radio reported concerns that he could be a security risk as a result of the deal, leading Sweden’s defence minister to question whether he could remain in his position.
“Several people with a high level of competence have declared a potential security risk,” Defence Minister Peter Hultqvist told the Dagens Nyheter newspaper. “Therefore, I think that one should take the situation seriously.”
Swedish Radio revealed on Friday that Putilov bought a house from a Russian businessman for 6m kronor in 2014, after which he quickly sold it on for 12m kronor.
The Russian businessman, who is currently serving a prison sentence in Russia, was married to a senior figure in the Russian tax authority in St Petersburg, indicating strong government links.
“There must be some kind of return favour in this, looked at rationally, or else it is working capital to act on behalf of someone else,” Lars Nicander, Director for the Center for Asymmetric Threat Studies  at Sweden’s National Defence College, said.
He said the profit would have given the Russian businessman a hold over Putilov, creating a security risk in parliament.
“You can hear intimate conversations, you can hear the different parties’ positions on the Nord Stream [gas pipeline], for example, or on Nato and trade agreements. You can even install listening devices.”
Hans Wallmark, defence spokesman for the Moderate party, told TT newswires: “There is a threat situation, and an intelligence threat against Sweden, which even Swedish political parties and parliament can be impacted by. So we should not be naive.”
“The responsibility for this must go right to the top, in this case to the Sweden Democrats leader Jimmie Åkesson.”