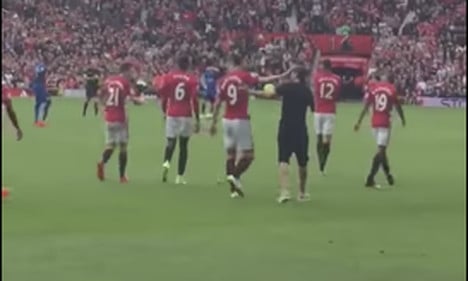 A grinning Zlatan pushed the man away with the palm of his hand. Photo: YouTube
During the first half of Manchester United’s game against reigning champions Leicester City, a near carbon-copy of the Swedish striker raced onto the pitch in a bid to meet his idol.
The rangy Swede took it in good humour but did not stop to chat to the invader, instead gently pushing him away with his palm before security guards pounced on him and dragged him back to the stands.
If you can bear the appalling soundtrack, here's a slideshow of what happened.
Here's some fan footage taken from the stands.
Manchester United went on to trounce Leicester with a 4-1 win at Old Trafford on Saturday.
Leicester imploded defensively as United racked up four goals between the 22nd and 42nd minutes.
It was a stylish display from a United side who had entered the game under pressure after losing their last two league games, against Manchester City and Watford, with Chris Smalling opening the scoring after replacing Rooney as captain.
The other goals came from Juan Mata, Marcus Rashford and Paul Pogba, who took his first United goal since his record-breaking £89 million ($115 million, 102 million euros) transfer from Juventus.
Zlatan came close to scoring, after a fabulous pass from Pogba, but the Swede's effort on the turn just cleared the bar.
Nonetheless, he said after the match that he was pleased with the performance of both his team and himself.
“We played well today,” he said. “Simple and with momentum”.
He said he felt he too had played well.
“Yes, very well today.”