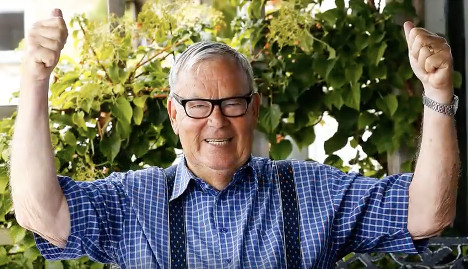 Gunnar Henningson celebrates his well-deserved victory. Photo: Svensk Raps
“I am not exaggerating. This is one of the happiest days of my life,” Gunnar Henningson from Limhamn said after securing his victory.
Henningson’s field, planted alongside those of other competitors at a farm outside the city of Helsingborg, yielded 6,570kg of rapeseed, a full 50% more than the least successful grower, winning him the title of “Rapsmästaren” or “Rapeseed Master”.
“Gunnar has made a very great engagement. Heart and soul into his rapeseed,” said the Southern Swedish Seed and Oil Grower's association, which organised the context alongside the agricultural newspaper Lantmannen.
“I went into it in a really rock-solid way. I checked everything,” Henningson explained after he was asked to divulge his secret. “I went very often to the field. I spent at least 200 hours all put together on the competition.”
The 40 competitors included entrants from Finland, Denmark, France, Great Britain, Lithuania and Germany, leading the organisers to refer to it as a “clash between the Swedish and European rapeseed elite”.
The competition was sponsored by fertiliser and tractor companies.
The 78-year-old, who works as an advisor for Svensk Raps, Sweden's national grower's body, had previously picked up an international prize for most economical grower of rapeseed.
Here is a photo of Henningson celebrating. (Photo by Rickard Nilsson)
And another: