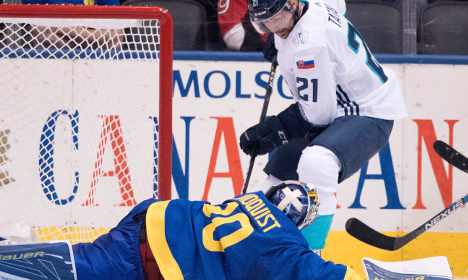 Tomas Tatar, of Slovakia, scored his second goal of the game 3:43 into overtime as Team Europe advanced to the final of the World Cup of Hockey with a 3-2 win over Sweden.

Tatar scored a controversial goal as the puck appeared to go in off his skate and past a startled Swedish goaltender Henrik Lundqvist at the Air Canada Centre arena.

“He created that whole overtime goal,” said Team Europe coach Ralph Krueger of Tatar. “We just continually found ways to do that, and that's the beauty of this team.”

Team Europe advances to the best-of-three final against undefeated Canada with the first game scheduled for Tuesday in Torono.

Team Sweden challenged the call and it went to video review but officials ruled it a good goal.

Tournament officials released a statement after the game with an explanation, saying the goal was allowed because Tatar did not intentionally kick the puck past Lundqvist.

“A puck that deflects into the net off an attacking player's skate who does not use a distinct kicking motion is a legitimate goal.”

Team Europe was the biggest longshot to get this far in the tournament as they have only been playing together for a few weeks.

They are coached by Canadian-born Krueger and their roster is made up of a mixture of star players from Europe's eight smaller hockey nations.

Their outlook appeared even bleaker when they were shut out 4-0 by a young Team North America in their first pre-tournament contest.

But eventually European pride and skill took over as they have won three of their last four games with the only loss coming against Canada in group play.

“There's so much happening here within this group as far as players stepping up at different times to take us to victory, and today it was Tomas,” Krueger said.

Tatar also scored just 12 seconds into the third period to give Europe a 2-1 lead.

Sweden's Erik Karlsson tied it with 4:32 left in the third, setting the stage for Tatar's overtime winner.

Marian Gaborik also scored for Europe, while Nicklas Bäckström had a first period goal for Sweden.

Swedish coach Rickard Grönborg said he was disappointed they did not reach the final but liked the fighting spirit in his team.

“There are things you want to go back and change, but right now I'm content we're top-four, but I'm obviously disappointed we're not top-two.”

Jaroslav Halak, of Slovakia, continued his solid play as he stopped 37 of 39 shots for Team Europe. Lundqvist made 28 saves for Sweden.