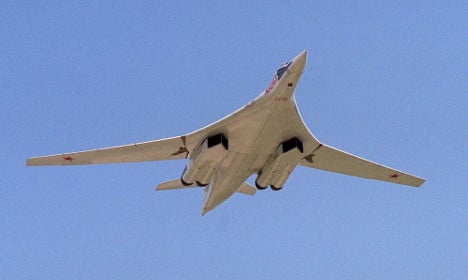 A Russian Tupolev bomber not related to the story. Photo: STR/TT

The incident is said to have happened in Icelandic territory close to the border with Norwegian airspace, where the Russian bombers were flying with their transponders turned off and had not reported their intended route.

The bombers are believed to be Tupolev Tu-22M models, capable of traveling at supersonic speeds and carrying nuclear missiles.

Newspaper Morgunbladid reports that the aircraft left from somewhere in the region of Spain and were supposed to be on their way back to Russia.

When the planes came within 88 kilometres of the passenger flight, Iceland’s Area Control Center contacted the pilot of the Icelandic jet to inform him of the nearby bombers. Predicting the height of the Russian planes was impossible as they had shut down all of their radar signals.

“I looked out my window and within a short time I saw two Russian bombers flying in formation,” the pilot told Morgunbladid.

He estimates that the bombers could have been as close as two kilometers beneath the passenger jet.

Russia's embassy in Iceland denied that the maneuver was dangerous however and insisted that Nato aircraft have made similar moves.

“It's just propaganda to say that Russian jets fly without location devices when Nato planes also do it,” Alexey Shadskiy, a counselor at the embassy told Morgunbladid.
In Sweden, Russian military aircraft have a reputation for their not so subtle outings, like when the Swedish military identified and followed four fighter planes from the country flying east of the island of Gotland.