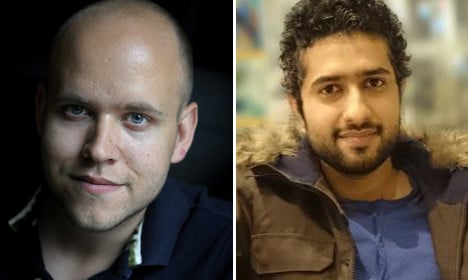 Pakistan native Tayyab Shabab is employed by Stockholm-based app developer Dynamo, who last week told The Local that he is a “world class” talent in his field.

Despite having a steady job in Stockholm, he recently had his application for a work permit extension rejected by Sweden’s migration authority because of a mistake made by a previous employer, who forgot to take out occupational pension insurance for him as agreed in the terms under which his original permit was granted.

The case has struck a chord among the tech community in Sweden and has also caught the attention of international names.

An online petition launched by European tech journalist Neil S W Murray arguing that Shabab should be allowed to stay in Sweden had on Monday been signed by more than 5000 people, including The Local's CEO and the likes of Spotify founder Daniel Ek and TechCrunch editor Mike Butcher.

To deport someone that pays taxes and contributes for a technical error made by former employer is nothing but insanity. Please RT https://t.co/B9INd6qtL2

Swedish Gov. is deporting a developer because his previous employer paid him too little in pension! https://t.co/Onn0Ue58iD #sthlmtech

Jessica Stark, co-founder and chief executive of Swedish startup organization SUP46 has also added her name to the plea, as has Jimmy Zhao, the founder of mentoring app Lunchback, which aims to help make it easier for newcomers in Sweden to network.

Many of the comments on the petition have pointed out that the case sends the wrong message to the kind of skilled talent Sweden hopes to attract.

“This only shows other professionals that Sweden is the wrong choice to build a life. I hope this is not the image Sweden wants the rest of the world to see,” Gionni Nilsson wrote.

“Stockholm, the Swedish government and many Swedish companies are putting great effort into attracting international talent just like Tayyab. The rules that Migrationsverket follows must be adjusted to support, not hinder, this ambition,” wrote The Local's co-founder and CEO Paul Rapacioli, who also signed the petition.

On Monday morning Shabab told The Local that a number of people have reached out to him directly to express their sympathy.

“A lot of people have contacted me on Facebook and LinkedIn wishing their condolences and expressing their feelings,” he said.

“It feels a little bit better to have the support of so many, but the thing is, it doesn’t change the decision.”

The developer added that he hopes to launch an appeal against the migration authority's decision this week.

The case is also starting to gain some political traction in Sweden, with the Centre Party demanding that rules should be changed to better assist the Nordic nation in its push to attract quality international talent.

“Individual cases are for the authorities or courts to deal with, but the fact that he had his application rejected alone shows that the rules need to change, because frankly this looks embarrassing for Sweden,” Johanna Jönsson, the Centre Party’s migration policy spokesperson told The Local.

The Centre Party is planning a motion in parliament suggesting that employers should be able to retrospectively correct minor errors, which Shabab’s former employer was not allowed to do under the current rules.

“The current rules mean that the smallest mistake can see an application rejected and there's no way to correct if afterwards, which we want to change. If more people come here to work, not least highly qualified people like in this case, it will make Sweden richer, allow businesses to grow and create more jobs,” Jönsson said.