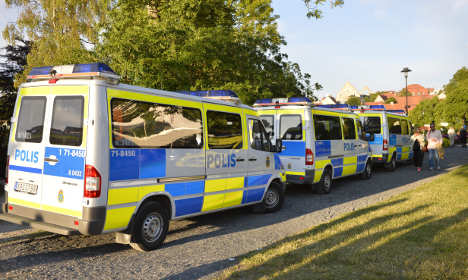 A file photo of police cars on Gotland not related to the article. Photo: Henrik Montgomery/TT

The post, published on the Gotland Police official Facebook page yesterday, explained that a group of children aged between 13 and 15 were attacked at a bus stop on Sunday evening by two men, who subsequently fled the scene.

The update then went on to say that the two perpetrators likely committed the act “because the kids looked like they come from another part of the world than Gotland and Sweden”, before adding that “it makes me unbelievably upset that kids who have fled from war and hell to Sweden and Gotland have been treated and beaten in this way”.

The post has been shared hundreds of times on Facebook since it was published, and has also attracted more than 200 comments. While many extended their sympathy, some questioned how the police knew that the attack occurred because of the boys’ origins, to which Gotland Police replied “there are explanations for that which we haven’t written on Facebook”.

“Everything indicates that this was a hate crime. You aren’t normally attacked when you are sitting waiting for the bus. It is their appearance that bothered the men who done what they done,” Gotland Police inspector Daniel Åhlén explained local newspaper Hela Gotland.

Though the original post warned anyone responding to it not to use profanity, on Monday the comments thread where readers could provide information about the attack was closed after it spiraled out of control, with Gotland Police explaining that it was “no longer possible to follow or moderate the update”.