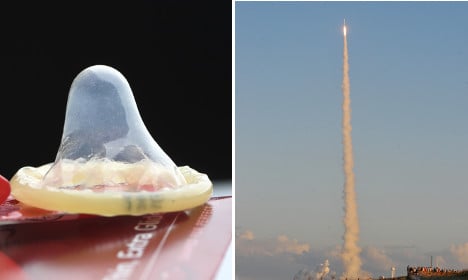 Should a condom be sent into space? It's the burning question some Swedes have posed. Photo: Fredrik Sandberg/TT & Craig Rubadoux/AP

Why? It’s all part of a campaign from the Swedish Association for Sexuality Education (RFSU), which aims to promote the use of a contraceptive they hail as one of “the most important inventions of all time” by asking Nasa to propel one skywards. The condom in question has been dubbed the “Swedish Space Condom”, naturally.

The RFSU has even put together a promotional video to aid their cause, complete with a shaky Swedish attempt at a Hollywood-style voice-over, which points out that “though we can’t be sure what alien sex organs look like, a condom might be handy if they decide to visit earth and find some hot earthlings”. Quite.

If all of that sounds a touch odd, it’s worth noting that Swedes seem to have a particular love of sending objects into space.

In 2015, The Local spoke to two Swedish brothers who used a weather balloon to launch a donut 32 kilometres above the surface of the earth for no real reason other than because nobody else had bothered to do it before.

As for the condom, we’re not sure how much use it would actually be in space, but that’s for the aliens to find out.