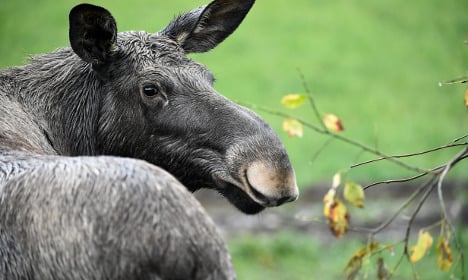 You talkin' to me? Photo: Mikael Fritzon/TT

Presumably, the man had imagined he would have a nice and calm morning walk with his dogs when he left his house in Svappavaara, north-west of Kiruna, at around eight o'clock in the morning.

Instead, he ended up having to go to hospital with a suspected broken arm after a furious elk cow launched a sudden assault on him, reported newspaper Norrbottens-kuriren on Tuesday.

“The man said he was attacked by the elk. He escaped the initial attack, but it came back and he then took a nasty blow to the arm,” said police spokesperson Börje Öhman.

It is believed the man had accidentally provoked the elk by getting between her and her two young ones.

Police decided on Monday to shoot and kill the family, but hunters searching the area around Svappavaara failed to find any trace of the violent mother and the chase was called off on Tuesday.

“It seems that the elk cow has returned to her right element, that is the forest,” said Öhman.

It is not the first elk attack in Sweden. For example, in 2014 a woman in Luleå was kicked to the ground and trampled by an elk just days after it attacked another dog walker. It was later put down by authorities.