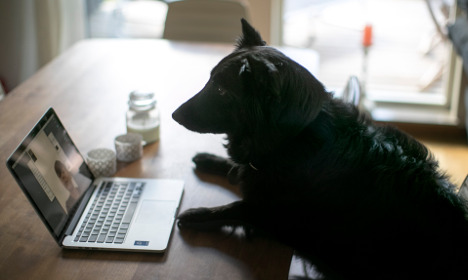 'Oh no, don't tell me I just clicked on THAT link.' Photo: Björn Larsson Rosvall/TT

Swedish rising superstars such as Tove Lo and Zara Larsson may be climbing charts all over the world with their pop smash hits, but whatever you do: if you google their names, be careful what links you click.

Now in its tenth year, Intel Security on Wednesday released its list of the world's most dangerous celebrities on the internet – the names that are the most likely to expose you to malware if you type their name into an online search engine.

Tove Lo came top among Swedish celebrities. The 28-year-old is a Grammy-nominated pop artist who has collaborated with stars like Coldplay, Adam Lambert and Ellie Goulding, and whose name in one out of ten cases will bring you to a harmful website if you click on it.

Lo and Larsson were both followed by Swedish YouTuber Felix Kjellberg, also known as PewDiePie – who recently hit the headlines after he posted a picture of a penis on social media which sparked rumours he had joined Isis – and Eurovision winner and host Måns Zelmerlöw.

Last year's most dangerous Swedish celebrity online was footballer Zlatan Ibrahimovic, closely followed by none other than Abba and cult rocker Yngwie Malmsteen.

“That the list changes from year to year is a clear sign that cyber criminals stay abreast of celebrity culture and who is the most popular at the moment,” Intel Security expert Christoffer Callender told TT.

“Those celebrities who have been successful get used as bait,” he added.

The survey Most Dangerous Celebrities, which is based on statistics put together by the company's own data centre, ranked US comedian Amy Schumer as the world's biggest virus risk to your laptop, followed by Justin Bieber, Carson Daly, Will Smith and Rihanna.