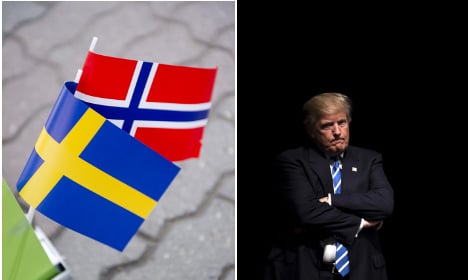 A recent article by Republican senator Tom Cotton and Republican congressman Mike Pompeo in the Wall Street Journal (“What We Learned in Scandinavia About Migrants”) opts for the latter stereotype. The basic premise of the piece is that Sweden has dealt horrifically with the refugee crisis, Norway has handled it perfectly, and that the USA should learn from that by listening to Donald Trump.

Confused? You aren’t the only one. Fortunately, Cotton and Pompeo know Norway and Sweden inside out. After all, they “recently visited Norway and Sweden to understand more about the European migrant crisis”. And there was me thinking that the refugee crisis was a complex issue that requires more than a mere visit to adequately grasp (and in truth, probably isn’t fully grasped by most people who live here). The writers in question aren't the first to propagate such a simplistic view on Sweden, by the way, they just happen to be the most recent.

To quickly establish the Norway = good, Sweden = bad dichotomy, the piece wastes no time in creating a handy lists all of the things Norway has done well and that Sweden, conversely, has botched. The Norwegians built a border fence, reduced migrant benefits, and put out adverts in foreign countries warning people thinking of coming that they will be deported if they do not face war or persecution. All to much success, we are told.

Sweden, meanwhile, “threw open its doors in 2013” (note the dramatic language here), bringing in migrants who are disproportionately poor (poor = bad), young (young = bad), undereducated (definitely bad, who deserves an education?) conservatively Muslim (in case you’re not on message yet, that’s bad too) and possess virtually no Swedish-language skills.

No Swedish skills you say? On the bright side, that should help them integrate with large swathes of the British, Australian and, dare I say it, American community in Sweden.

If you blink you may miss it, but there’s a leap there that deserves some further inspection. Did a vacuum created by failing to listen to a broader range of views on immigration lead to the rise of the Sweden Democrats? Most likely. Did the success of the Sweden Democrats then create a “hamstrung minority government” in 2014? With more than two thirds of the post WWII governments in Sweden minority-led, the truth is that the current form of government is more akin to business as usual than a radical shift. Perhaps the writers missed that on their educational visit to Scandinavia.

Sweden’s concession of implementing border controls is then mentioned, but strangely, these aren’t praised in the way that Norway’s were earlier in the piece, despite the number of refugees forecast to enter the country in 2016 recently being halved (which presumably would be seen as a positive by the authors). Instead, they move on to detail that seven percent of the 2016 Swedish budget will be allocated to “migrant services”, and that, terrifyingly, “no one knows where the new money will come from.”

Less terrifying perhaps is that Sweden has just been named the sixth most competitive economy in the world (thanks in part to robust economic growth in 2016), or that it is comfortably outperforming European giants like Germany and Britain this year. Or that is experiencing the best economic growth in the Nordics (even better than those clever Norwegians, fences and all). Those points aren’t deemed relevant, because they don’t help illustrate the idea that Sweden is on the brink of financial turmoil because of the refugee crisis. No one knows where the new money will come from, remember.

Putting flippancy aside, there’s a serious point to be made here about how time and time again people parachute into Sweden, stay a few days, then make broad conclusions about this for many foreign but vaguely recognizable place to suit their own agenda. Unfortunately, while it doesn’t necessarily make the best headlines, nor evoke the strongest emotions (and in the internet age, emotional reaction is king) the truth about Sweden almost always lies somewhere in the middle.

Like any country coming to terms with a rapidly changing, increasingly global world, there are legitimate problems here. There are certainly legitimate challenges to be dealt with around immigration and the impact it is having on what until not so long ago was a largely monocultural society, too, but to reduce those issues to a few short paragraphs with little context then use that to make a partisan value judgment on the state of the place is dangerous.

If you want to know what’s happening in Sweden, perhaps read The Local. We live here, we work here, we report here and at the minimum, we engage with people here. We don’t necessarily have all of the answers, but we’ll at least attempt to draw on our knowledge, the specialist knowledge of others, and provide some balance in our assessment of what is happening in this fascinating country. It deserves as much. Or rather, readers deserve as much.