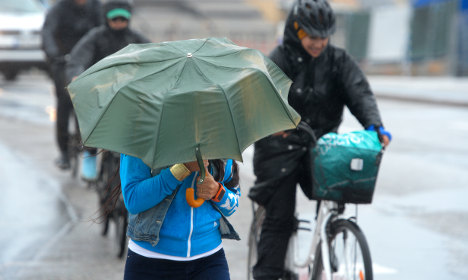 The weather is expected to clear up. Photo: Anders Wiklund/TT

Weather agency SMHI kept class-one weather warnings (the least serious on a scale from one to three) for windy weather at sea in place on Friday morning, including both the west coast and the Baltic Sea.

“You should not head out with the boat today,” said meteorologist Sandra Andersson.

Other warnings for heavy winds inland were lifted early on Friday, but authorities who had been out clearing roads overnight warned commuters to drive slowly, specifically singling out central and western Sweden.

“If you're driving in Västra Götaland, Värmland or Örebro counties, watch out. There could be fallen trees left on small roads near wooden areas,” Swedish Transport Administration spokesperson Anders Vilhelmsson told the Aftonbladet tabloid.

All train traffic was halted between Strömstad and Uddevalla on Thursday due to the wind, but at around 6.30am trains were again running according to schedule.

However, delays were expected on the Värmland railway line after a tree toppled onto an electrical wire, causing one train to grind to a halt for hours between Kristinehamn and Björneborg.

“It's a single track, so there will be knock-on delays this morning. Around ten trains are affected,” said Vilhelmsson.

The early-autumn weather was expected to clear up at some point on Friday.

“It will stay windy along the Bohuslän coast and on Gotland, but the wind will subside at some point today,” said SMHI meterologist Andersson.