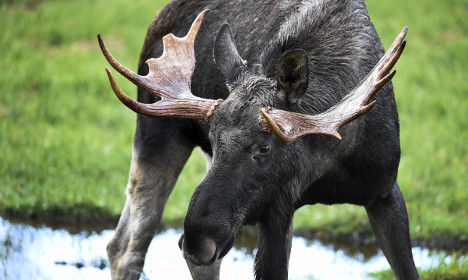 One of the randy animals in question. Photo: Mikael Fritzon/TT

Almost all of the elk hunts in the Skåne region have been postponed from the 10th of October to the 22nd, newspaper Kristianstadsbladet reports.

According to the Skåne branch of the Swedish Association for Hunting and Wildlife Management (Svenska Jägareförbundet) an unusually warm end to the summer means the animals are breeding later in the year than usual.

“A late summer and warmth well into the autumn shifts everything. Elks thrive in a particular climate, but it varies with the times,” Jonas Paulsson told Kristianstadsbladet.

All but one of the hunting teams in the region have agreed to the delay, the hunting association said.

“Most agree and think it is a good idea. The elk hunting season varies depending on where in Sweden you are. Parliament decides when it starts,” Paulsson explained.

Around 250,000 hunters take part in Sweden’s elk hunt every year, with close to 100,000 of the animals killed each season. Hunting is permitted each day from an hour before sunrise until sunset.

Elk ( or moose, if that's what you prefer) shouldn't be taken lightly when they’re in the mood. During their mating period thousands of them travel through Sweden in search of love, creating a genuine risk for unaware drivers.

Last year the National Wildlife Accident Council launched a campaign warning that road speeds should be adapted during the autumn in order to minimize the possibility of collisions.

And they aren't the only creatures currently on the look for love. Earlier this week The Local reported on a rare muskox sighting in rural Sweden after the animal apparently got lost while looking for a mate.