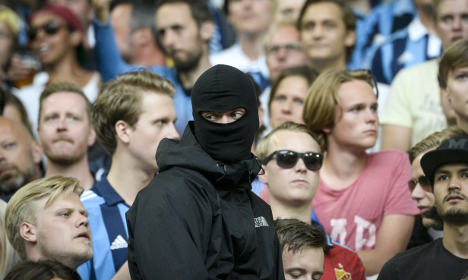 The proposal comes at a time where a number of high-profile violent incidents at Swedish football matches have made global headlines. In August, a match between Jönköpings Södra and Östersund was called off when a masked supporter ran onto the pitch and assaulted Östersund goalkeeper Aly Keita.

It is not uncommon to see hooligan firms in the standing sections of Sweden’s football grounds covering their faces with balaclavas or masks while using flares and fireworks. Now, the Swedish government wants to make it illegal for supporters to hide their identity while attending games.

“The Swedish police has got better control of the situation before, during and after high-risk games. However, we still have to get rid of violence, and the so-called bangers (fireworks),” Sweden’s minister for home affairs Anders Ygeman told The Local.

“The proposed legislation is a new tool for the police to stop those who are ruining the experience for all of us who only want to see a good match.” A masked supporter at an AIK-Djurgården match in September. Photo: Stina Stjernkvist/TT

A number of exceptions to the ban are mentioned in the proposal, including covering of the face due to the weather, health, other justified exceptional circumstances or for religious reasons.

“We have to follow other conventions and laws on freedom of religion,” Ygeman explained.

Due to start in March 2017, the proposed ban was put out for consultation, and the majority of bodies consulted gave a positive response, the Swedish government said.

One objection came from the Swedish Police, who said that in some cases it could be difficult for them to prove that a mask had not been worn for religious or health reasons. The government argued however that personnel working at events would be trained appropriately on how to make those judgments.

The CEO of the Swedish Football League explained to The Local that he did not consider identifying the purpose of wearing a mask at a football match to be particularly difficult.

“There has never previously been a problem in identifying the difference between someone who has religious reasons to cover their face and someone who is doing so with the intent of committing criminal acts. In practice it is very clear what the purpose is,” Mats Enquist said.

“The wearing of masks at Swedish football matches is mainly connected to the use of illegal pyrotechnics and bangers. Violence is very rare in our stadiums,” he added.

Asked by The Local whether violent incidents at football matches were unusually common in Sweden compared to other modernized nations, interior minister Ygeman insisted that work has already been done to combat the problem, and suggested further legislation could yet be introduced.

“A lot has been done to get rid of violence and this is one more step in the right direction,” he said.

“I do not close the door on further legislation or regulations.”