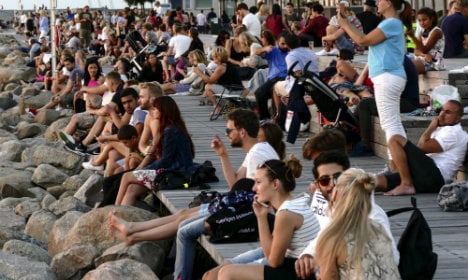 Swedes relax on Malmö's Sundspromenaden at sunset on 14th September 2016. Photo: Johan Nilsson/TT
Sun, swimming ice cream and barbecues enriched the lives of many Swedes well into September this year – despite a stormy end to the month yesterday. Preliminary statistics are now confirming increases in temperature compared to normal levels for the month.
“It has been 2-4 degrees hotter than normal,” meteorologist Charlotta Eriksen of the Swedish Institute of Meteorology and Hydrology (SMHI) told news agency TT.
SMHI compared statistics from last month with data from the period 1961-1990. The years since 1990 have seen general increases in temperature, but not to the extent of those seen this year.
“We are above normal levels throughout Sweden, even in the mountains, but the individual records that we are expecting to be set have occurred in West Götaland,” Eriksson said.
Statistics for the months are not yet entirely complete, but SMHI is already able to confirm a number of new records. In Ulricehamn, temperatures on the 15th of September hit 26.9 degrees Celsius (80.4°F), breaking a record of 26.5°C (79.7°F)  that has stood since 1906.
Halmstad (27.5°C/81.5°F) also saw a new record for September, while the town of Målilla in Småland set the month's highest temperature in the country on the 15th September, measuring in at 28.2°C (82.8°F).
In several parts of the west of the country, average temperatures were higher than they were in August.
“It has also been dry, which increases the feeling that it is hot,” added Eriksson.