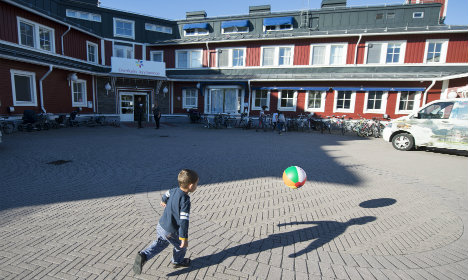 A child plays outside a hotel converted into asylum accommodation in Överkalix. File photo: Fredrik Sandberg / TT
When the refugee crisis was at its most acute, Swedish municipalities signed contracts with private companies providing accommodation for much longer periods than proved to be necessary, according to the report.
In October 2015, for example, 9,300 unaccompanied minors claimed asylum in Sweden, leading to a number of municipalities taking steps towards ensuring long-term agreements with external partners in order to ensure that all children would be provided for.
The number of unaccompanied children arriving in Sweden has since dropped by 98 per cent, says the DN report.
Much of the accommodation – which varies in type between centres – is currently empty while the contracts remain valid, costing Migrationsverket a reported 2.5 million kronor ($290,000) per day.
According to DN, this cost can potentially continue to increase as the number of asylum seekers decreases.
Contracts for properties to be used for asylum accommodation are negotiated and signed by individual municipalities which can then apply to Migrationsverket for their costs to be covered. DN reports that compensation can run up to 1,600 kronor ($187) per unused bed.
“With hindsight, it was an unneccessary decision,” Lars Ericsson, director of Sölvesborg Municipality in Blekinge, told DN in reference to a several-month-long contract signed by Sölvesborg Municipality with a hostel in the region of Skåne.
After the contract was signed, the number of refugee children in the area dropped significantly, leaving the hostel empty.
“We have not had anything close to enough use (of the hostel) to justify its cost,” Ericsson continued.
Kenneth Andersson of Migrationsverket told DN that the current situation “could be thought of” as a waste of taxpayers' money.
“The municipalities have some fairly heavy agreements. Maybe they see no reason to cancel them, since they receive 1,600 kronor from us as remuneration for every empty place,” Andersson told DN.