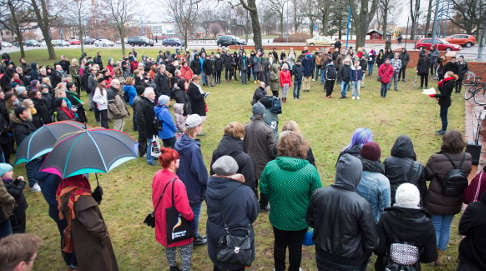 A demonstration in Dalarna. Photo: TT

In an interview with local radio station P4 Dalarna, she claimed that she has been harassed by both men and women in the town for “not living in the right way”. Tension heightened during a confrontation when she was hit in the face by a young man who had been harassing her over a long period.

Walaa reported the incident to the police but in the following days the row spread over social media and the story was picked up by local Liberal Party leaders.

“I decided we should organise a demonstration because that is the way we solve conflict in Sweden. We do it by trying to hold a discussion and say “this is not right”, Anna Eling, chairperson for the Liberals in Hedemora told TT.

“We are not going to back down, we have had enough. People should be able to feel safe on our streets and in our society,” she added.

With Walaa and Geha still living at an undisclosed address, police say the suspect has been questioned and since released, although he remains under suspicion with enquiries continuing.