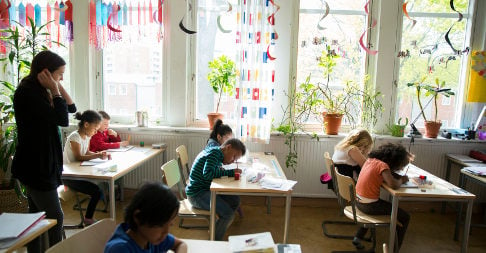 “This shows that local politicians need to prioritise schools, both for the sake of the students, but also if they have ambitions to grow as a county and attract more people to the area,” said Johanna Jaara Åstrand, chairwoman of the Swedish Teachers Association.

“Well-educated and well-informed, better off parents are more likely to choose a school for their children. But this survey also shows that they are more prepared to switch counties. There is an awful lot more that should be done to ensure that we improve equality so that schools with in the toughest situations also get the best teachers and resources, which can have a huge effect on the students,” added Åstrand.

However, the survey also found that a large majority, 84 percent of those questioned, said that they would not be likely to move in the next two years.

Schooling has long been a hot potato in the general debate over Swedish society. According to The Institute for the Evaluation of Workplace and Educational Politics (IFAU), the main reason for the inequality of results among schools is the increasing housing segregation in Sweden, although the proliferation of free schools and with it a wider choice for parents also has an effect.

A recent study by the National Union of Teachers in Sweden (Lärarnas Riksförbund) concluded that the gap between Sweden's best and worst schools is growing.

The study looked at five different areas including student achievement and teacher qualifications in order to produce figures on how school performance varies between Sweden’s municipalities. Finspång in southeastern county Östergötland did worst, while Lomma in Sweden’s southernmost region Skåne came out on top.