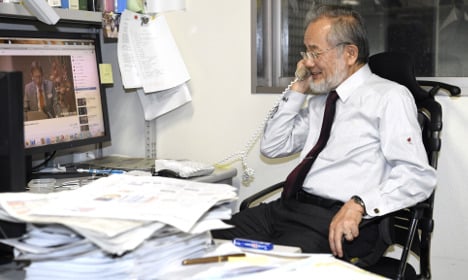 If you're just tuning in, here's a round-up of what's been going on in Stockholm today, including an interview with one of the members of the Nobel Prize Assembly.

Christer Höög, professor of molecular cell biology and a member of the Nobel Committee, has told The Local that he hopes it will be an opportunity to turn over a new leaf.

“It is really nice to speak about something good that has actually happened. It has really been a great day to tell the world that we are doing our job, we have generated and informed you about a new fantastic discovery,” he said.

Follow us tomorrow when the winner of the Nobel Prize in Physics is announced.

The room empties, but there's more detailed analysis on the blog. Tomorrow, I'm off to the Nobel Prize in Physics. https://t.co/h02yVTZZy5 pic.twitter.com/opd1c5etnp

Here's some of what Christer Höög, a member of the assembly that hands out the Nobel Prize, spoke to our reporter Lee Roden about Ohsumi's discoveries.

“It’s an enormous gamechanger. The basic physiology was there without this discovery. Everything is working in the body. But this is as big as discoveries on DNA replication, the way we deal with DNA repair, it’s similar to DNA repair in a sense because in DNA repair research you deal with DNA molecules. Here, you deal with cell structures which need to be taken care of.”

“So without this waste system – and you can see that in cases where genes involved in autophagy are affected – you get a complete mess. Because you cannot identify, package, transport waste, and waste is happening all the time, every day in your body. You need to get rid of it. Otherwise it just piles up, you accumulate it, and you get sick. It is really, really important. The discovery is fundamental and has an enormous impact. If you look at today’s science there are an enormous number of publications that deal with this understanding, fine-tuning and helping us to understand more and more how these things are involved in all basic aspects of biology.”

We just spoke to the Nobel Committee's professor Christer Höög about Ohsumi's work. Even I understand it better now! https://t.co/h02yVTZZy5 pic.twitter.com/A03h9bUhDe

The press conference is over, but keep an eye on this space. We'll be back with more information about this year's winner shortly.

“Ohsumi's work turned autophagy into one of the most intensely studied fields of biomedical research” https://t.co/h02yVTZZy5 #NobelPrize pic.twitter.com/R3VzTeqNSf Yoshinori Ohsumi was born in 1945 in Fukuoka, Japan, and works at the Tokyo Institute of Technology. His first reaction when he got the phone call telling him he had won the Nobel Prize was “ah, am I allowed to leave the house?”.

The chair of the Nobel Assembly, Professor of Medical Genetics Anna Wedell, tells the press conference: “This is a prize for basic discoveries but it’s already clear that autophagy is critical in both the origin of diseases and handling counteracting them. That applies to a broad range, both to cancers and things like Alzeimhers… He has enabled totally new research areas. Neuro-degeneration is definitely an active area it impacts as is cancer.”

Ohsumi is the 23rd Nobel Laureate and the 6th Medicine Laureate born in Japan.

This is the point where everyone tries to understand the winner's research.

Autophagy is “a fundamental process for degrading and recycling cellular components”, the Nobel Prize Assembly's summary helpfully explains. “The word autophagy originates from the Greek words auto-, meaning “self”, and phagein, meaning “to eat”. Thus, autophagy denotes 'self eating'.”

We are now getting a crash course in Ohsumi's prize-winning discoveries of mechanisms for autophagy. https://t.co/h02yVTZZy5 #NobelPrize pic.twitter.com/YAWjPGUjQm

The Nobel Prize in Physiology or Medicine 2016 has been awarded to Japanese scientist Yoshinori Ohsumi “for his discoveries of mechanisms for autophagy”.

The winner is supposed to be announced at 11:30.

What secrets are on these big piles of paper this member of staff just brought in? Perhaps well find out the winner sharpish this year. pic.twitter.com/d7WXiFPqCs

#NobelFacts Average age of the 210 Medicine Laureates during the past century: pic.twitter.com/rVt98uy17l

If you prefer looking at moving pictures, below is the live stream of the announcement.

The 50 members of the Nobel Assembly decide on the winner through a majority vote. There's plenty of secrecy involved. Here's but one example: an expert will be available to answer journalists' questions later. The Local's reporter Lee Roden, who's at the press conference, just asked who the expert would be and was told it was a secret. Not even the media staff know. Apparently there is a list of ten or more experts and depending on who wins, an expert in that area is the person who does the interviews.

11:08 210 individuals have won the Medicine/Physiology Prize

Alfred Nobel's will specified that prizes should be given for the “most important discovery” in physics, chemistry and medicine, as well as the “most outstanding work in an ideal direction” in the world of literature”. There was also the fifth prize for peace, which Swedes prefer to refer to as “that other Nobel Prize” (it's handed out in Oslo – good old Scandinavian rivalry).

Imagine the disappointment of all the international journalists gathered at the press conference today if at the end of this long wait, they just tell us “nah, go home, couldn't think of one this year”.

Would estimate it's at least an even split in terms of the number of international journalists to Swedish here. Lots from China & Japan.

Just a quick recap: Italian surgeon Paolo Macchiarini, who worked at the Karolinska University Hospital and the Karolinska Institute in Solna north of Stockholm, had gained a reputation as a leading specialist in windpipe transplants, but two of his patients died and he was accused of falsifying research and his CV. Harriet Wallberg and Anders Hamsten, the two Nobel judges who lost their positions on the panel in the wake of the ensuing scandal, had previously served as heads of the Karolinska Institute.

Read more about the biggest soap opera in Swedish medical research history here. Macchiarini himself, it is worth noting, denies the allegations against him.

This is the week when Sweden likes to think the rest of the world stops and turns its eyes on Stockholm. In this case, the Nobel Assembly at the Karolinska Institute may have had enough attention this year. It is still recovering from a scandal involving the medical university's now-former researcher Paolo Macchiarini.

Two of the members of the panel were removed (or, politely asked to step down) earlier this summer as a result of the controversy, but some of the other university researchers involved in the Macchiarini scandal are still members of the Nobel Assembly. They are however understood not to have taken part in picking this year's winner.

Seat taken. Having traumatic flashbacks to university being in this lecture theatre. Lots of international media here, filling up quickly. pic.twitter.com/y9tKU8DMQd

… it's a new Nobel Prize season. We kick off with the announcement of the 2016 Nobel Prize in Physiology or Medicine (try saying that quickly ten times in a row) in around an hour. Live blogging the event for you is our editor Emma Löfgren with our reporter Lee Roden reporting directly from the press conference in Stockholm. Don't forget to follow them on Twitter. While you're at it, follow The Local too.