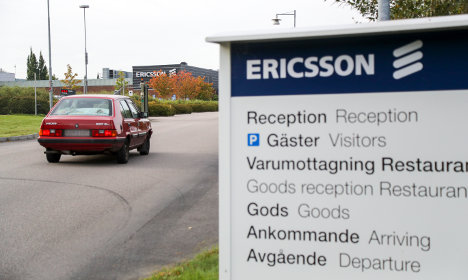 “Ericsson intends to reduce 3000 positions in production, research and development (R&D) and sales and administration – combination of voluntary and forced reductions as well as other measures such as outsourcing,” the company said in a press release on Tuesday morning.

It said the reductions would affect around 1000 jobs in production, 800 in research and development and 1200 in other operations, at its offices in Borås, Gothenburg, Karlskrona, Kumla, Linköping and Stockholm.

“Ericsson intends to make significant reductions of operations in Borås and Kumla,” it said, adding that it would also reduce the number of its consultants in Sweden by 900.

Jan Frykhammar, president and CEO of Ericsson, added: “Ericsson is going through a large transformation. We continue to have a strong focus on R&D, and since many years, most Ericsson employees work in software development and services, rather than hardware production. The measures are necessary to secure Ericsson's long-term competitiveness as well as technology and services leadership.”

The company has around 116,000 employees worldwide, including more than 15,000 in Sweden. Layoffs have been feared since it embarked on a major cost-cutting programme earlier this year.

“It is a difficult moment for the many employees and the communities affected. Ericsson is an important company for Sweden,” Sweden's Enterprise and Innovation Minister Mikael Damberg told the TT newswire.

Ericsson also said on Tuesday that it would employ around 1000 engineers over the next three years.

“We have a clear goal that our R&D in Sweden should be world leading, not least in next generation systems. In the short term we have to reduce the number of positions in R&D, primarily within administrative roles. At the same time our intention is to bring in new competence in new technologies. Therefore, we intend to recruit approximately 1,000 engineers in Sweden, primarily from universities, over the coming three years,” said Ulf Ewaldsson, Chief Strategy and Chief Technology Officer.

Ericsson has gone through a turbulent period recently. At the start of the summer its shares dropped significantly after reports in a Swedish newspaper claimed revenue figures had been exaggerated.