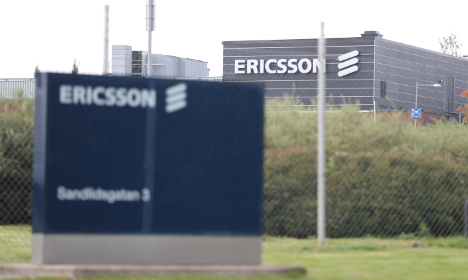 Ericsson announced in April that it would target structural changes by expanding an existing nine billion kronor ($1 billion) global cost and efficiency programme to bolster efficiency and growth.

“The government has been informed of Ericsson's plans which consist of putting in place its largest cost-saving plan in its recent history,” reported SVT, citing a source close to the matter.

“A fifth of its workers must leave the group” in Sweden, it added.

The company has around 116,000 employees worldwide, including 15,000 in Sweden. It has so far declined to comment on the reports.

One of the likely consequences of cuts would be the closure of Ericsson's plant in Borås. The city's mayor has already booked a crisis meeting with Sweden's minister for employment, Ylva Johansson.
“If it turns out that the information is correct, it would be a very hard blow for Borås,” mayor Ulf Olsson told news agency TT.
In September, Swedish newspaper Svenska Dagbladet reported that Ericsson planned to end manufacturing in Sweden with the loss of around 3,000 jobs.

The newspaper report came after Ericsson fired chief executive Hans Vestberg in July after seven years in the post.

Under his guidance, the company struggled to fend off competition from rivals Nokia, Siemens and Alcatel-Lucent, and to gain ground in saturated and competitive markets such as Europe and North America.

Do you work for Ericsson in Sweden? Get in touch at [email protected]