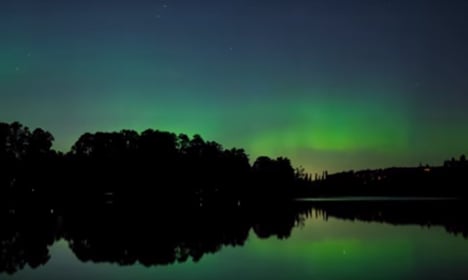 Screenshot from the video by Jannis Dickmann.

The Local's reader Jannis Dickmann, a German Erasmus student in Sweden, sent us this mesmerizing time-lapse video of the Aurora Borealis dancing over the Haga Park (Hagaparken) in Stockholm.

Seeing the Northern Lights, or the Aurora Borealis, is a jaw-dropping moment for many. Caused by solar winds clashing with the Earth’s atmosphere, they are particularly frequent from late autumn to early spring, but can be spotted as soon as the sun begins to set on the bright northern Swedish summer skies.

They are usually easier to spot the further north you get, but elevated solar activity in the past few days has increased chances of seeing them across Sweden.

Dickmann also runs a Sweden-themed travel blog, which includes tips for how to spot and get the most out of the Northern Lights.

“Waiting with my tripod set on a pier in Stockholm's Hagaparken, a slight green tone covered the sky around 22.00h local time,” Dickmann writes in a blog post. “One hour later, the display was so strong, that I could even take the time-lapse video shown [below]. And it was definitely worth waiting.”

We could not agree more. Watch it and see for yourselves.


Video by Jannis Dickmann, who runs 'Norrut, a travel blog from Sweden'