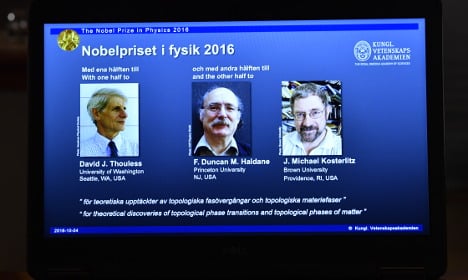 The winners of the Nobel Prize in Physics. Photo: Anders Wiklund/TT

LIVE BLOG: The Nobel Prize announcement behind the scenes

Three British scientists will this year share the Nobel Prize in Physics, with one half of the award going to US-based David J Thouless and the other half jointly to F Duncan M Haldane and J Michael Kosterlitz “for theoretical discoveries of topological phase transitions and topological phases of matter”.

“This year's Laureates opened the door on an unknown world where matter can assume strange states. (…) Thanks to their pioneering work, the hunt is now on for new and exotic phases of matter. Many people are hopeful of future applications in both materials science and electronics,” read a summary by the Royal Academy of Sciences, which announced the winners at a press conference in Stockholm on Tuesday.

Kosterlitz was born in 1942 in Aberdeen, UK, and is currently based at Brown University in the US. Haldane was born in 1951 in London and works at Princeton University. Thouless is an emeritus professor at Seattle's University of Washington and was born in Bearsden, UK, in 1934.

An emotional Haldane addressed the press conference via a phone link from the US, saying he had come across much of his discoveries by chance. “I was very surprised and very gratified,” he said. “A lot of tremendous new discoveries that are based on this original work are now happening.”

Topology is an advanced mathematical method which describes properties that only change step-wise. Kosterlitz and Thouless used it to overturn a theory that superconductivity or suprafluidity could not occur in thin layers. Haldane discovered how the concept could help explain the properties of chains of small magnets found in some materials.

We just spoke to prof. Gunnar Ingelman, secretary of the Nobel Committee for Physics on this year's prize winners. https://t.co/gqS7zqXPmF pic.twitter.com/LSg6GcHmUm

Nobel Committee Secretary Gunnar Ingelman, one of the Royal Academy of Sciences judges behind the award, called their work “groundbreaking”. He told The Local he did not think Haldane had merely tried to be humble when he said he had made his discovery by chance.

“I think actually that captures a very essential thing when it comes to great scientific discoveries. If it was something many people had thought about, then it would have been more commonplace and done earlier. These great breakthroughs are often done serendipitously, by chance, so to speak,” said Ingelman.

“What really makes the difference with a great scientist is that they realize that this new thing they sort of stumble on has something very important in it. And when they start to work on it they dig and dig in order to study it and understand 'what is this really?', and are broadminded in the sense that they will try different paths in how to describe it, manipulate it in the lab perhaps, and then they understand how big a discovery it is later on. But not from the very start,” he added.

What does a cinnamon bun have to do with this year's Nobel Prize in Physics? Find out here

But asked if he could provide practical examples of these discoveries in use, he said: “Not yet. There are many examples in the research labs where people construct or build up material on an atomic level and study those properties so they can observe exactly the phenomena they describe. That's why also the prize can now be given because it has been demonstrated that 'yes, they were right'.”

“In the future, I think we have very good hope that new materials with new quantum properties can be used in different circumstances, it could be for example in computers. there is a dream of quantum computers,” said Ingelman.

“It's still a dream but there are actually prototypes of very rudimentary quantum computers being constructed. That's only a research lab where you construct systems you can manipulate and see if they treat information in the way it should according to quantum principles so that one could use it for a possible future quantum computer.”