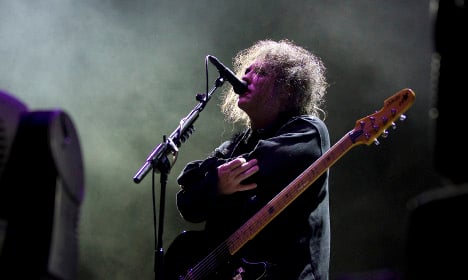 Arguably the definitive 80s goth band, The Cure are still going strong 13 studio albums into their lengthy career, and in the coming week Robert Smith and his band will bring their unique brand of despair-filled lyrics contrasted with upbeat melodies to Sweden.

On Sunday, October 9th they’re at Stockholm’s Globen, before heading over to Gothenburg’s Scandinavium three days later. More information including where to buy tickets can be found here. Ravi Shankar is not only one of the most famous Indian musicians of all time, he also made the sitar synonymous with the 1960s. These days, daughter Anoushka keeps her father’s great legacy alive, and the Grammy nominated musician also performs her own compositions which push the boundaries of the stringed instrument.

Shankar will be playing at the Uppsala Concert and Congress Hall on Sunday, October 9th, providing a rare opportunity to relive one of the definitive sounds of the 60s in Sweden – or perhaps even experience it for the first time. More info here. Queen may still occasionally tour with a guy who once failed to win American Idol, but purists will argue that it isn’t the same band without Freddie Mercury, so the next best thing is seeing a high quality tribute act.

One such example is Queenie, who have played hundreds of concerts across Europe in the 10 years since they formed, and were even invited by Mercury’s former PA Peter Freestone to play the world’s biggest Queen tribute festival in Montreux back in 2008.

Queenie are performing in Borås on Friday, October 7th. Less than an hour’s drive from Gothenburg, a trip to the town could be worth it for Queen diehards and glam rock enthusiasts alike. Tickets can be purchased here.

Any guitar player worth their salt will recognize the name Paul Gilbert from both his solo work and time with shredders Racer X, but for non-musicians he may be better remembered as one of the members of 90s rock act Mr. Big, who had a number one single in the USA and Sweden in 1992 with soppy ballad “To Be With You”.

These days Gilbert is touring on his own, mixing original work with covers of the likes of Led Zeppelin, Rainbow and AC/DC. The American is a virtuoso, so the capacity to enjoy a guitar solo or five is a prerequisite to enjoying his concerts, but if reliving 80s and 90s guitar music sounds appealing, you can check him out at Uppsala’s Concert and Congress Hall on Friday, October 7th. More information and tickets available here.

A Tribute to Dire Straits (Malmö)

Dire Straits haven’t toured since they disbanded in the mid 1990s, and with band leader Mark Knopfler showing little to no interest in resurrecting his old act, the younger generation of fans still look unlikely to ever see their heroes in the flesh.

A solid consolation is The Swedish Dire Straits Show, a tribute act that does exactly what it says on the tin, mimicking the 80s giants’ music to the finest detail – including Knopfler’s famously divisive Bob Dylan-esque vocals.

If you like Dire Straits, that vocal style will be your thing of course, so grab a chance to relive the biggest hits as well as the deep cuts at the Swedish tribute’s Malmö show on Sunday, October 9th. Tickets are available here. This wasn’t even a good look in the 80s. Photo: Inge Gjellesvik/NTB scanpix/TT