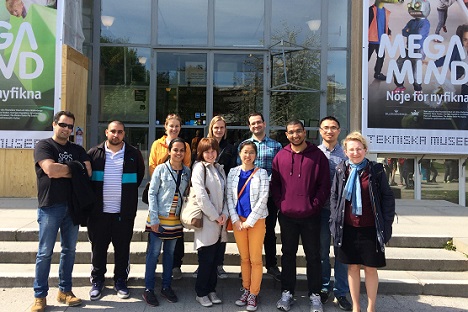 There are dozens, if not hundreds, of reasons for moving to Sweden.

And there are thousands of people with vastly different backgrounds who have all ended up in Stockholm.

“They all have one goal in common, though: to find a job,” says Miia Luomajoki, who teaches Swedish as a second language.

But what many don’t realize is that they do not have to take the same cookie-cutter Swedish classes en route to that goal.

Miia works at a community-learning centre called C3L in Tyresö, just southeast of Stockholm, where she teaches Swedish for Programmers.

“SFX-IT, as we call it, is Swedish lessons which are tailored for people with an education in programming and IT,” Miia explains. “Students are able to learn Swedish at the same time as they take classes in IT vocabulary, Java, C#, Python, and more. We focus on Swedish in the workplace.”

It’s not just another Swedish for Immigrants (SFI) course. SFX-IT is one of nine dedicated Swedish programmes in the greater Stockholm area designed to prepare educated immigrants for a specific profession in their new country.

“I came to Sweden two years ago looking for new opportunities due to the financial crisis in Spain,” says Adriana González, a computer engineer originally from Mexico City but who lived in Spain for seven years. When she went to register for normal SFI classes she saw a flyer for SFX-IT – and immediately knew it was the better option for her.

“It's important for me to learn the technical vocabulary needed in my work, and it was a great opportunity to improve my technical skills, too.”

Thair Yalldko, a programmer from Iraq who moved to Sweden in 2013, has a very different background, but eventually also found his way to the unique programme.

“I worked at the Ministry of Industry in Iraq, but the situation was difficult, and I was so close to death many times,” Thair tells The Local. “I was forced to leave my country and come here to learn a new language, new culture, and new laws.”

When he first arrived in Sweden there was only one thing on his mind: safety.

“But after a few months, I started thinking about how start my life again, and how to be useful to society,” he says. He registered at the local work authority and heard about SFX-IT.

“It felt like the right choice and an unbelievable opportunity,” he says.

Adriana and Thair both had classes every day, learning to read, write and speak Swedish, but also earning certification in programming languages such as Java and C#. The students also received support preparing their CVs and cover letters and practicing for interviews.

“About 15 hours a week is Swedish, and the rest is programming,” Miia explains. “Students can also do an internship at an IT company as part of their education.”

This mixed approach makes it much easier for students to enter the labour market after their studies.

“It used to be easier to get IT jobs in Sweden without speaking the language, but today it’s harder,” Miia explains. “Programmers don’t just sit quietly behind their screens anymore. They need to communicate with colleagues and clients alike.”

Many students of SFX-IT already have jobs, but enrol in distance studies when they realize they’re lacking necessary language skills. Students have the option of studying online in the evenings if they can’t commute to Tyresö during the day.

“Sometimes companies send us their employees to learn Swedish. Other times it’s the employees themselves who realize that if you want to live in Sweden, you should learn the language.”

Find out more about Swedish for Programmers

For Adriana it certainly paid off.

“I enjoyed every single part of the course,” she tells The Local. “Personally it helped me meet people and communicate, and in my career it improved my skills, and finally got me a job.”

Indeed, while students can take the classes for up to three semesters, Miia says most of them have secured IT jobs within one or two semesters.

“The school has a great network and contact with many IT companies, and we invite guest lecturers and participate in recruitment fairs and other relevant events,” she explains. “We offer a lot that you can’t get through normal SFI courses.”

“SFX-IT was a wonderful journey which led me to my company,” he says. “I would recommend it to all programmers who want to learn Swedish and start working here.  “It changed my life and I'm so happy for that.”

This article was produced by The Local Client Studio and sponsored by C3L Tyresö.