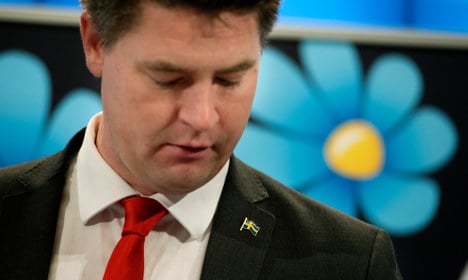 The clip, from August 2012, was published on Facebook by 'Inte rasist men' ('Not racist but') on Thursday, and shows Oscar Sjöstedt telling a story at a party about his days working at a slaughterhouse in Iceland.

He describes, laughingly, how a couple of his German colleagues used to kick the bodies of sheep that had fallen down from their chains in the ceiling onto the floor and call them “die Juden”.

“They were like Nazis, so they were like not allowed to be in Germany, they were really crazy. (…) When they were drunk at parties they walked around, like, heiling,” he says in the clip.

Sjöstedt is the finance spokesperson for the anti-immigration Sweden Democrat party. He defended his comments on Friday, underlining that he did not participate in the incident mentioned in the video.

“This incident is so bizarre in general, it is so surreal, so it's some kind of natural reaction of the body to laugh at it. You don't know how to relate to it in general. I can only speak for myself, that's how I work,” said Sjöstedt. “I don't know if it's what you usually call dark humour, or gallows humour, or black humour, or even morbid humour perhaps, to push it to extremes.”

“We're laughing, I think, more at the wackos I'm talking about than anything else,” he added.

The video comes at an inopportune time for the Sweden Democrats, who were themselves forced to criticize one of their own MPs after she put forward a motion to reduce press support, which was widely seen as anti-Semitic after it singled out the Jewish-heritage Bonnier family.

“The film shows, yet again, the dark heart of Sweden Democracy, the hooligan fascist truth behind the social conservative mask,” wrote Dagens Nyheter columnist Johan Hilton about the video of Sjöstedt.

“I wonder what the SD bosses say to each other when they're not filming,” commented Interior Minister Anders Ygeman of the ruling Social Democrats on Twitter.

The Local has emailed Sjöstedt for a comment. He told TT that he believed he would stay on as the Sweden Democrats' finance spokesperson – and appeared to receive the party's backing too.

Mattias Karlsson, the group leader of the Sweden Democrats in parliament, who is seen at the end of the clip carrying a cigarette and interjecting “does anyone have a lighter?” defended Sjöstedt.

“When you see it today you get distraught. But I know that Oscar is staunchly anti-Nazi and likes animals. There's some kind of dark humour to it. It seems strange, but sometimes people use humour when something is unpleasant and uncomfortable, as a way of handling it,” he told TT.

“It is possible that you would have got a different picture if you had seen the whole evening. Taken out of context, it seems like an inappropriate reaction to bizarre, sick things. I don't see this as an expression of deviating ideology or something that would justify action within the parliamentary group,” added Karlsson.