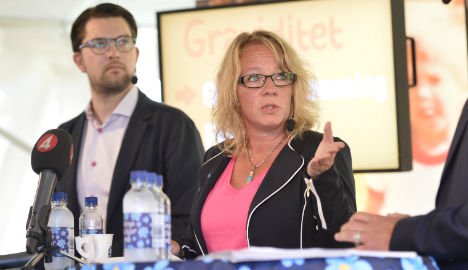 Carina Herrstedt on stage with Sweden Democrat leader Jimmie Åkesson at the Almedalen festival in 2015. Photo: Scanpix
Sweden's Aftonbladet newspaper on Saturday published a private email sent by Carina Herrstedt, the party’s deputy vice chairman, in which she joked that a local football team should hire a roster of multicultural and sexually diverse players.
“First you get a couple of Jews, because under law it is forbidden to persecute them,” the joke began. “You strengthen the team with a negro, a Chinaman and and an Indian, because they’re more colourful. At the rear, you recruit two gays, to have more force from behind. As the goalie you deploy a 40-year-old nun, because she hasn’t let anything in for 40 years. As reserve goalie, you get a gypsy, because they take absolutely everything!”.
The latest scandal comes just two days after a recording was released of the party’s finance spokesman Oscar Sjöstedt laughing as he told an anecdote about working in an abattoir with Germans who kicked dead sheep, joking that they were “the Jews”.
It also comes after  week when another MP, Anna Hagwall, called for a reduction in the influence of the family-owned media group Bonnier AB, whose owners are Jewish, writing in an email to Aftonbladet newspaper that “no family, ethnic group, or company should be allowed to control more than 5 percent of the media.”
Swedish Prime Minister Stefan Löfven told the Aftonbladet newspaper that the string of recent scandals “said it all” about the party.
“That's what we've said all along, that this is a party with Nazi and racist roots. But it's not just that they have these roots, it is there in the here and now,” he said.
“That a member of parliament from the SD submits a motion on media policy based on anti-Semitic propaganda, that says it all,” he continued. “And that the economic policy spokesperson, SD's candidate for finance minister, is standing and cheering and laughing at anecdotes about Nazis kicking animals and referring to Jews, it also says everything.”
Herrstedt defended the email, arguing that she had found it on the internet and had sent it ironically.
“I think it is a little bit funny, that's that’s obviously why I sent it,” Herrstedt told Aftonbladet. “If you want to, you can read the irony in it.”
She argued that as the joke was sent in a private email, it had should have no bearing on the Sweden Democrats or her role in the party.
“I haven’t joked like this within the Sweden Democrats, but with my ex-partner. What the party has to do with this, I do not understand.”