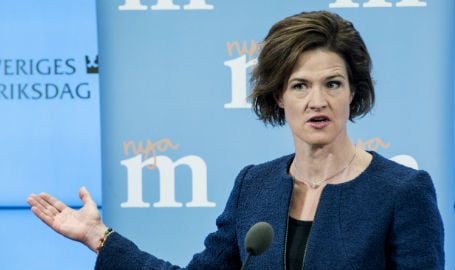 Anna Kinberg Batra has ruled out cooperation with the Sweden Democrats. Photo: Lars Pehrson/SvD/TT
In an interview on October 6, even before the latest scandal involving a senior party member sending an antisemitic, racist joke, Anna Kinberg Batra said she would be unwilling to cooperate actively with the party.
She also ruled out a situation similar to that in Denmark, where the minority centre-right government relies on the parliamentary support of the populist Danish People’s Party.
“We do not want to begin cooperating with the Sweden Democrats. We have none today, and we do not want to start tomorrow,” Kinberg Batra told Dagens Nyheter.
“I think that it is a racist party in the way it does business, but I do not think that all of their voters are,” she added.
As for the Danish solution, she said she believed that it would inevitably end up bringing the Sweden Democrats dangerous influence.
“Then it would become a dependency and bring political influence, and I am not ready to start cooperating with the Sweden Democrats.”
The Sweden Democrats’ leader Jimmie Åkesson has predicted that the Alliance coalition of centre-right parties will have no choice but to cooperate with his party if they want to form a government after the 2018 election.
A string of recent scandals, however, may have made it more difficult for them to do so without alienating their voters.
First a Russian-born Sweden Democrat researcher working in  parliament was accused of making six million kronor in a property deal with a Russian businessman.
Then Anna Hagwall, a Sweden Democrat MP, called for the Jewish-owned Bonniers newspaper group to be broken up, arguing in an email to Aftonbladet that no “ethnic group” should be allowed to control more than 5% of the Swedish media. On Saturday evening she resigned as Mattias Karlson, the party's parliamentary leader said she had damaged the party's battle against antisemitism.
On the day of Kinberg Batra’s interview a third scandal broke when a recording was aired of the Sweden Democrats’ financial spokesman laughing at his own anecdote about Germans he once worked with in an abattoir kicking dead sheep and calling them “The Jews”.
Norway’s Conservative Party now rules in coalition with the populist right-wing Progress Party, but the Moderate Party has so far seemed unwilling to follow their example and enter coalition with the Sweden Democrats, or even to follow the example of Denmark's ruling Liberal Party, who rely on the Danish People's Party's support.
Polls by the British and Norwegian research groups YouGov and Sentio regularly show the Sweden Democrats party to have more support than either the Moderates or the ruling Social Democrats, with as many as a quarter of voters saying they will vote for them.
Other pollsters, such as Sweden’s Sifo, put the party’s support as low as 15%, still enough to make them the third largest party in parliament.