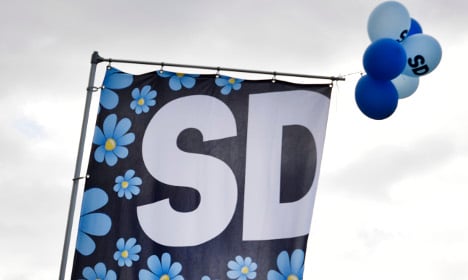 Löfven’s label for SD isn’t the only one that is a bone of contention: there is also the matter of whether labelling them a “far right” party is fair or not. So just where exactly do SD lie on the political spectrum? The Local asked experts for their opinions on the matter.

“It’s not controversial to point out that when SD was formed in the late 1980s it was by people who could reasonably be classified as Nazis,” Nicholas Aylott, a senior lecturer in political science at Södertörn University in Stockholm, told The Local.

“What was true then needn’t necessarily be true now, but on the other hand, 25 years isn’t a long time in politics. So the roots of a reasonably young party are probably not entirely irrelevant to understanding its character today.”

One person who would agree with that assessment is Swedish PM Löfven, who corrected his initial statement after the TV debate by expanding that he meant SD had “Nazi roots”, adding that the party “came from the white power movement”.

Indeed, SD’s roots have played a significant part in colouring how they are labeled today, according to Ian Manners, a politics professor at the University of Copenhagen who specializes in European politics.

“Löfven was right in that SD clearly have their roots in Nazi and neo-Nazi movements in the 1980s, which has been sustained through the 1990s and 2000s,” he told The Local.

Does that mean that today’s SD could be considered “far right”? Uppsala University political scientist Li Bennich-Björkman doesn’t think so.

“SD are not ‘far right’ by any standard. In placing them on a left-right scale they are actually centrist. In terms of welfare policies, for example. They could also be characterized as holding social conservative values,” she told The Local.

“Nationalism-cosmopolitanism is a separate scale from the left-right one,” she clarified. “There, the party is far to the pole of nationalism (whereas you would find the Greens and Feminist Initiative at the other end).”

Södertörn University’s Aylott agreed that finding an appropriate left-right political label for the contemporary SD is not a straightforward matter.

“That would put them unequivocally on the right in one sense but then their economic policies are probably in most respects to the left of those of the (centre-right) Alliance. So deciding what label to give them is not unproblematic at all.”

One way of trying to assess how appropriate any of the labels for SD are is to use a comparative approach, looking at the party from a broader perspective than just within Sweden.

That’s a method University of Copenhagen professor Manners thinks is a fair one, but again, it’s not simple.

“One way to try and unpack this is that in the USA and the UK, the term ‘far right’ is regularly used to describe them. The Independent, Guardian, New York Times and Washington Post would all use that term,” he said.

“Another is to compare their stance with that of other right of centre parties across Europe. Broadly speaking they would still remain far right in one sense because they haven’t made an attempt to enter government yet, and that moment of entering government does have a moderating effect. So from a comparative perspective, they’re still far right.”

A third option is to compare SD to other parties in Europe by looking at European Parliament groups.

“There’s a right of centre party grouping in the European Parliament which doesn’t advocate leaving the EU, and to the right of them is the European Freedom and Direct Democracy group where the Sweden Democrats sit,” Manners explained.

“That’s definitely far right, in that they are anti-EU, but also anti-immigrant. They’re not however extreme right, as there’s a group further to the right of them still.”

Uppsala University’s Bennich-Björkman argued however that the term “far right” is too often used without analytical purpose.

“Far-right is a strange label, often used not as an analytical but as a normative and negative way of characterizing many of the parties in Europe that are immigrant-unfriendly and often un-civic in rhetoric,” she said.

“Aggressive nationalists would be a more adequate way of labeling many of them.”

Södertorn University’s Aylott was not of the same opinion.

“I do tend to still describe them as far right. For me, ‘radical right’, another term used, sounds a bit too much like neo-liberal. That’s just the connotation that has grown up – it’s the way people use it. Whereas far right does tend to be more associated with authoritarian nationalist right.”

All will shape whether the conclusion is that they are “far right”, or something else.