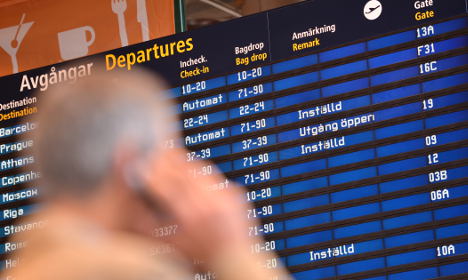 A departure board at Arlanda airport. Photo: Johan Nilsson/TT

The number of passengers that flew via Arlanda grew by 3.2 percent in 2015 to a total of 23 million, making it the 15th most-used airport in the EU.

And while that meant it overtook Vienna’s Schwechat in terms of passenger numbers, it wasn’t enough to stop both Dublin and Brussels leapfrogging the largest airport in Sweden. The Irish capital airport saw an over 10 percent increase in use.

Readers in the south of Sweden will point out that an even bigger Scandinavian airport is easily accessible just across the Öresund Bridge, and indeed, Copenhagen’s Kastrup ranked significantly higher than Arlanda.

The most used airport in the EU in 2015 was London’s Heathrow with a whopping 74.9 million passengers, followed by Paris Charles de Gaulle with 65.6 million. Frankfurt placed third with 60.8 million