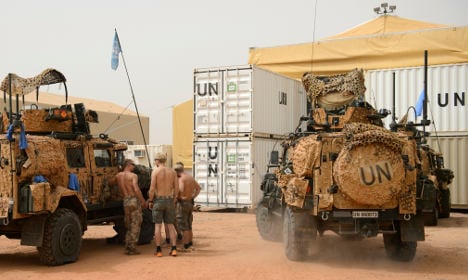 “On Monday night a Swedish patrol on a mission in Timbuktu city was exposed to a suicide bomber. No Swedish soldiers were injured in the incident,” read a statement by the Armed Forces.

It added that the troops were being looked after by the Swedish unit in Mali.

“The most important thing for us just now is that we don't have any injured Swedish personnel,” spokesperson Tony Remes told the TT news agency. “Some form of crisis team is looking after them.”

The Armed Forces said there were no other nationalities involved.

Another statement issued later on Tuesday said that the soldiers had been carrying out a routine mission in Timbuktu when an unknown man approached them and detonated explosives he was carrying.

“The perpetrator died in connection with the attack,” read the second statement.

“Relieved to hear everyone in our peacekeeping force in Mali is safe, following a suicide attack,” tweeted Swedish foreign minister Margot Wallström.

Relieved to hear everyone in our peace-keeping force in #Mali is safe, following a suicide attack. Our troops do a great job w UN for peace.

The AFP news agency quoted unnamed officials saying that the Swedish troops had killed the attacker.

“A suicide attacker attempting to commit a terrorist act was neutralized,” said a source within the mission, requesting anonymity as the UN had yet to formally comment on the incident.

However, the Swedish Armed Forces denied this.

“We're carrying out an intelligence mission in central parts of Timbuktu. There's a meeting there and then a man approaches the Swedes. Then he detonates a bomb he was carrying,” Major Kristian Sandahl, chief of staff of the Mali unit, told the TT news agency.

The man's identity and political affiliations had not been established on Tuesday afternoon.

“We are very thorough when we investigate something like this and do not want to say anything until we know for sure,” said Sandahl.

The Swedish troops in Mali are part of international UN-led peacekeeping mission Minusma. Around 250 Swedish soldiers are based at Camp Nobel outside of Timbuktu.

A week ago a UN soldier from Tchad was killed and eight others wounded in an attack on a UN camp in north-eastern Mali.